The Wine Rambler was born out of curiosity and love for wine. We are a non-commercial guide to, mostly but not exclusively, German wine. Amongst others, you will also find Austrian, French and English wines here, and whatever else we enjoy drinking.

The Wine Rambler brings you tasting notes (or rather wine stories as we believe there is so much more to a wine than just a paragraph of sensory impressions), background stories, interviews, reviews of wine related products and wine merchants, wine and food pairings, reports from wine events we attend and a range of miscellaneous things.

Writing from the UK and Germany, we bring together both local and international perspectives on a wine country that is much more diverse and fun than most people realise. This seems to be particularly true of Kingsley Amis, who in 'Everyday Drinking' remarked: A German wine label is one of the things life's too short for, a daunting testimony to that peculiar nation's love of detail and organization.

Once upon a time two friends lived in the town of Munich. Their names were Julian and Torsten. Every once in a while they met over wine and food to ramble on about this and that - until one day Torsten moved away, across the sea to the town of London. So all that was left was to share the occasional virtual drink and ramble. And after doing this via email for two years, in 2009 a good bottle of Riesling gave birth to The Wine Rambler.

So here we are, all about, to quote the late great Townes Van Zandt, 'lots of booze and lots of rambling'. We do not believe in arguing whether a particular wine should be rated 84/100 or 85+, and many of the formulaic aspects of wine trade and writing do bore us to tears. Wine should be about the enjoyment.

We are however well aware that rambling on about, for instance, those intriguing mineral undertones of the 2001 Piesporter Goldtröpfchen Riesling Spätlese will make us sound like armchair-sitting, wine-sniffing snobs. Becoming that is in fact one of our goals in life. 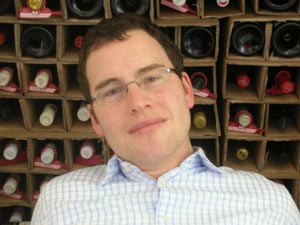 My wine biography would have to begin around the year 2000, when, out of curiosity, I first set foot into the local franchise of a well-known German wine retail chain. Their selling point is that you can taste all of the wines they offer before buying. Having only ever had supermarket wine before, I was hooked immediately by the variety I found there. The really great thing about this chain, though, was that they had an extremely strenuous process of blind tasting every new vintage, selecting out of hundreds, nay, thousands of available wines the 20 to 30 that they were offering each year. Isn't that fantastic? After about two years, I started to wonder how a process like that could result in the exact same wines from the same wineries being chosen year after year. It's a mean trick to play on a naive person. Disappointed, but undaunted, I turned to the internet, specifically a German wine merchant who only, and I say only, dealt in stellar vines from miraculous vintages that they could offer at laughable prices. It took about the same amount of time for me to realise that...- well, you get the picture.

I am, today, still frighteningly gullible about wine and still, I hope, as curious. But it became clear to me at some point that, in order not to fall for each and every ruse of wine marketing, I would need some working knowledge of my own. That was when I decided that I would need some kind of focus, based on wine styles that had impressed me most so far. The first, as you can imagine, is Germany. My second love is French wine. I like the enormous regional variety there, the traditionalism of many wine styles, and the way wine is viewed as a part of a cultured life. I am even inspired by the utter arrogance with which the French look at other wine nations, as I figure that if I am ever to reach the stage of full-fledged wine snob, I too need to take the high road to it.

A historian by training, I work as an archivist for a Bavarian archive. 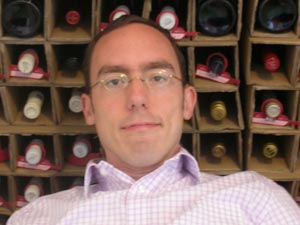 Despite a dad who loves wine, I decided to grow up a Puritan, shunning the evils of alcohol. Eventually it was my love for cooking that made me think about wine as a food companion. Back then I was mostly influenced by a Zeitgeist that dictated that wine had to be dry; in Munich, it also had to be Italian (maybe French, maybe). An off-dry Riesling from the Mosel paired with a Thai dish made me see the errors of my ways. I wanted to learn more about this wine, and so I had to turn directly to the winery. This made me realise that if one random wine could be exciting enough to overcome the lazy habit of buying from shops, how much more excitement was waiting out there to be discovered?

So I embarked on a mission to learn more about wine. Specifically, I got interested in Riesling, as I learned to embrace the liveliness of acidity that a good Riesling can bring to the table. Almost naturally, this led to an interest in German wine and a desire to understand it better. After I had moved to London I started to share what I had learned with British friends. To my surprise none of them had anything to teach me about English wine, which made me more interested in looking into the lesser know wine countries - England in particular. It was also easy to fall in love with Austria, and it is impossible not to be fascinated by France.

A historian by training like my co-Rambler, I am now based in London where I help enable digital research.

So here we are. Keen to learn more about wine. Keen to hear from you. And keen not to suffer the fate of the famous 17th century diarist Samuel Pepys, who in 1665 noted:

I being much troubled to hear from Creed, that he was told at Salsbury that I am come to be a great swearer and drinker, though I know the contrary; but, Lord! to see how my late little drinking of wine is taken notice of by envious men to my disadvantage.