Back with a bang: North Korean wild grape wine

How do you come back from the dead you ask? If you have to, I think, do it with a bang. In our case, this ruled out re-starting the Wine Rambler with a usual post, such as a review of a steely Riesling. So I went in search of something unusual. And I think it is fair to say I found it, or rather it found me: ladies and gentlemen, boys and girls, I give you a review of North Korean wild grape wine from the DMZ! 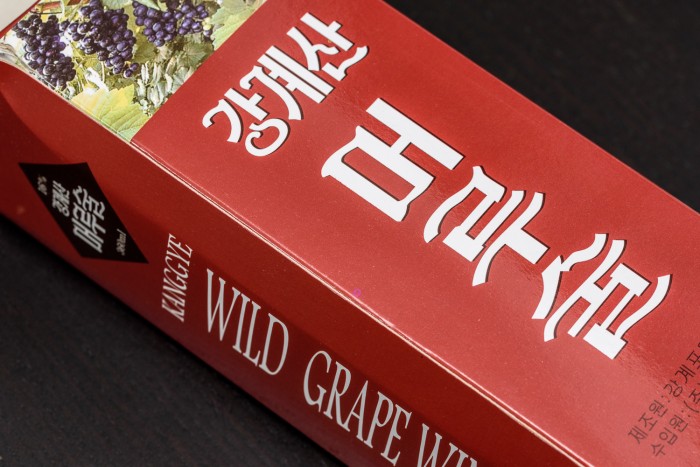 Before we venture into the Korean Demilitarized Zone, a few words about the Wine Rambler. Julian and I started this venture purely for our own entertainment almost ten years ago. Over time it grew and changed, and so did our lives. With work and other commitments there was less time for rambling, especially for telling the really interesting stories. Research, interviews, travel and tastings can take a lot of time, and neither Julian's nor my schedule was flexible enough. That is still the case, but increasingly I found I was missing both the writing and the wine community. So, I dusted off the blog, gave it a new interface and here we are. It is unlikely we will ever go back to the olden days of several posts a week, but I am still looking forward to the occasional ramble.

Now, about the wine at hand. This highly unusual specimen came to me directly from the Korean Demilitarized Zone. It turns out that between mines, artillery and two of the largest armies of the world there are gift shops. And one of the delicacies you can buy there are wild grape wines. This bottle was brought to me by a dear and adventurous friend who, rightly, felt I would be very excited to try something unique. The Korean guide however was less excited and, repeatedly, warned my friend that the wine was no good and should not be drunk. Thankfully, that didn't deter her, and so here I sit with a glass full of a rather unappealing liquid, mustering all the courage I have to sample and report back to you. 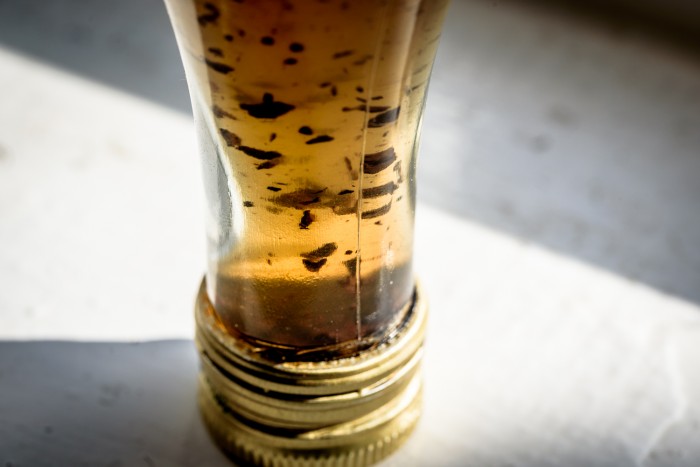 Usually in a visual description of wine you'd start with the colour, but the first impression of the wild grape wine is dominate by dregs. Lots of black particles swimming happily in the liquid. Did I say particles? Some of them are easily half a centimetre long, so particles gives the wrong impression. This is one of the few cases where 'unfiltered' doesn't promise something exciting but rather an omission that leaves me alarmed. Anyway, the wine itself is decidedly brown, with a red touch that becomes stronger the brighter the surrounding light.

The smell is equally heavily oxidised, somewhere between musty basement, weak sherry and pears marinated in something really strong. A pleasant hint of flowers, hay and honey is counteracted by a not quite as pleasant sharpness, like a vinegar-based cleaning product, or a cheap red wine vinegar (just not as strong). To be honest, from the looks and stark warning from the guide I had expected worse. If you don't pay attention you could almost imagine sniffing a corked red dessert wine. 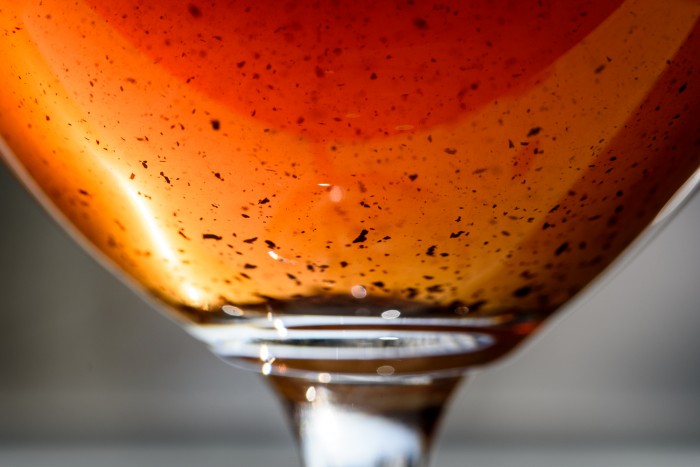 On the tongue it oscillates between a not unpleasant sweetness and a sharp alcoholic bitterness that stings a bit. There are hints of caramelised sweets and juicy fruit, perhaps prunes, that by themselves are quite enjoyable. On the top of your tongue the wine almost feels round, but soon turns into something that is both weaker in substance and sharper in bite. The finish has both pleasant and unpleasant elements, but ultimately ends in musty cardboard.

On balance this is much better than I expected, although at the same time far from enjoyable and not something I would ever want to drink. It was an unusual experience though, and as such very fitting to restart the Wine Rambler.

"ultimately ends in musty cardboard", LOL, you had me laughing here!
I feel like I can quite well imagine what it tastes like. And looking at the photos - you drank that without putting it through a filter first?! Yuk. You're ready to join the next Jungle Camp :D
keep posting - and alert us on FB or by mail whenever there is a new post!

Comrade Torsten, I salute you and commend you for demonstrating to the imperialist powers of the wine world that this small blog, while it harbours only peaceful intentions, will continue to develop, in dedicated secrecy, reviews and stories that will, once revealed, strike fear into the preconceived notions of the wine powers that be.

Thrilled you're back!! I've…

Thrilled you're back!! I've frequently wondered where you've got to. Hope all's well - the new look blog is fabulous.

In reply to Thrilled you're back!! I've… by Christie Dietz…

Great to hear from you,…

Great to hear from you, Christie. It's good to be back indeed!