Bodegas Terras Gauda, or: So this is what Wine Journalism feels like? A Wine Rambler review

The samples were evenly divided between three reds and three whites. Let's start with the latter, since Albarinos from the coastal Rías Baixas region are very popular among the more knowledgeable for being fresh and mineral, seafood-friendly whites. There were two of those, the 2011 Abadia de San Campo (100 % Albarino) and the 2011 O Rosal (18% Loureiro and 12% Caino Blanco). I liked both, with their bold acidity, their lean bodies and their citrus-peachy aromatics with a whiff of seaside smells, but wasn't blown away either. I found the fruit a little generic (think canned fruit salad as opposed to real fresh fruit) and one-dimensional (enjoyable). The 2010 La Mar (85% Caino Blanco, 10% Albarino, 5% Loureiro) was a vastly more serious white: Freshly cut fruit in the nose, deep and ripe, with a herbal and spicy background. Powerful, balanced and quite complex on the palate, with mineral backbone and a honeyed hint of maturity. Probably the best Spanish white I've had, which is not saying very much. Still: excellent, a style of wine I can see myself getting into (a deeper well).

Turning to the reds, I should first say that I was a little nervous of opening any on them because of the daunting alcohol content: None of them clocked in at less than 14.5%. But, testament to the state-of-the-art winemaking at Terras Gauda, none of them came across as hotly alcoholic on the palate or unduly heavy. Two wines were from Bierzo and 100% Mencía, the 2007 Pittacum and the enhanced version, the 2007 Pittacum Aurea. Both brought interesting red fruit notes (red currants, sour cherries), as well as vegetal and earthy components, but combined them with massive oak, strong tannins and enormous sweetness, of the kind that comes from ripeness, not from residual sugar. I confess I didn't quite know what to make of this pair: The red currants were reminiscent of a classic Rioja, the vegetal aspects of Cabernet Franc from the Loire, but if you take both of those and pump them up on steroids, what do you get? An impressive, but an ultimately rather tiring red wine experience (decent may seem harsh, but I found them too overextracted to be enjoyable).

With the 2007 Quinta Sardonia, on the other hand, you know exactly what you're getting: Make way for the big red. Half from Tinto Fino (also known as Tempranillo), half from an assortment of "international" grapes, this is a showstopper for the critics and the score-mongers: A thick-blooded smell of cassis, sweet cherries, jam, gingerbread, red meat, and, unmistakeably, pickles. On the palate, the dark polish, the shiny red and black you would also expect from a very good Australian Cabernet-Shiraz blend. The kind of wine that makes you take hold of the glass with both hands for fear it might overpower you otherwise. But very well done, with clear and focussed fruit and just the right amount of tannin to hedge it in (great). 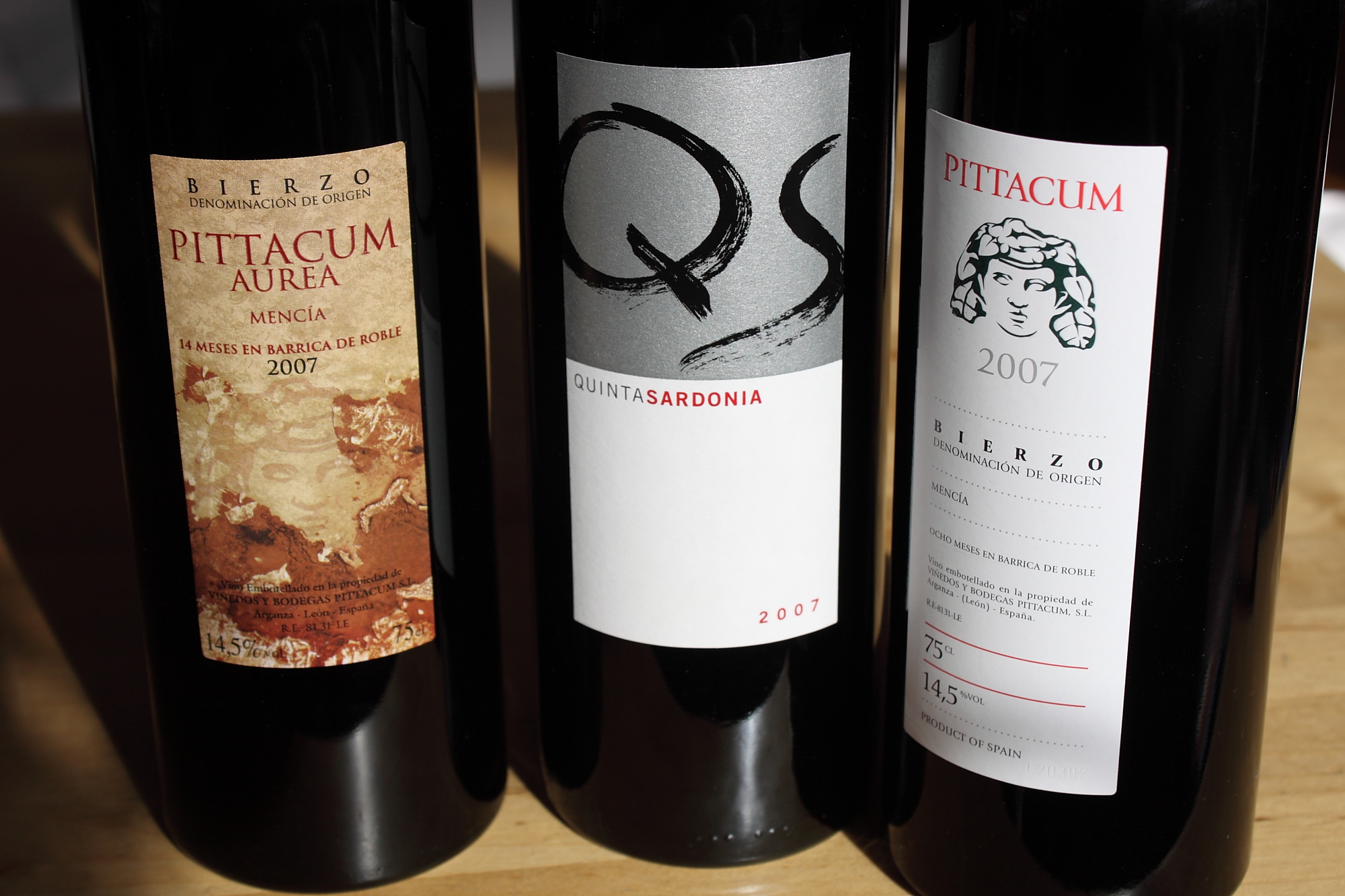 Considering the dream-like wealth of regional and indigenous grapes that there is to work with (I counted eleven different varieties altogether in those six bottles), these wines seem to me too much focused on succeeding, on achieving what is expected of them: Fruit, power, concentration. What I was looking for was a little quirkiness, a little strangeness, a little personality. I did find a good bit of it in the "La Mar", it's true, but too little in the remaining five bottles. I found myself thinking about the case I would make to the Terras Gauda people if I knew enough about winemaking to make it. It would probably include things like less new oak, earlier harvesting, wild yeasts and so on.

But I think I need to put it another way. So, if I may, and this may be an indecent proposal to put to a respectable winery such as Terras Gauda: I'd like to see those wines with their clothes off. The gents need to get out of their new oak tuxedos. Let's see what those gym-built muscles really look like. The Ladies: Those peachy dresses are easy on the eyes, no doubt, but they need to come off. Let's see your, I mean, let's see what's, erm, underneath. What I'm trying to say is: "Natural", "terroir", "regional" are all clichés, but what I would like to see is winemaking that is not so terribly confident in itself, that is less sure about how the finished wine should taste. Is this a naive complaint to make, when these wines are obviously impressive and will more than deliver on their money? Maybe. But these wines seem to both demonstrate and withhold the staggering potential of this part of Spain, and I want to hold them to the highest standard I can come up with. And this standard, at the Wine Rambler, is a sense of place.

The communications people at Terras Gauda have been mightily busy, it seems, and we were obviously not the only writers to have received a sample (well, Julian did and I was left empty as the Munich branch drank all the wine!). The Cellar Fella reviewed some of the wines and so has the Cambridge Wine Blogger and a few others, including Jamie Good.

I have tried the 2011 Abadia de San Campo, was not too impressed though. Felt it was a bit too citrusy and at the same time a bit too much going on. Its a though the wine was not too sure what it wanted to taste like so when you sip it, you get 4/5 different flavours in your mouth all at one time. I look at it as though its quite a confused wine.
I compare that to a 2011 Dragon De Fuego Sauvignon Blanc. Similar in price, yet with this wine you can taste the real flavours inside. Zesty, yet a tad citrusy (bearable)and ultimately a crisp white wine. check out their site, www.dragondefuegowine.com