Since the well-remembered Silvaner symposium, Wine Rambler full committee meetings have regularly featured a pair of wines with a characteristic similarity (grape variety and vintage, mostly) that we taste without knowing which is which. Is this a sensible thing to do? The detractors of tasting blind argue two things: It favours bolder, more easily understandable wines at the expense of quieter, more refined types, thereby contributing to a levelling of taste and the loss of originality and regionality in wine. It also, in their view, turns tasting wine, which should be about enjoyment and open minds, into a sort of competitive sport. Valid concerns, surely, but we keep finding that without putting your own palate to the test once in a while, you lay yourself open to the twin dangers of preconceived notions and of auto-suggestion ("Label says this has notes of ripe blackberries. Yeah, I think I'm picking them up..."). So we're stumbling on with the blind tastings. 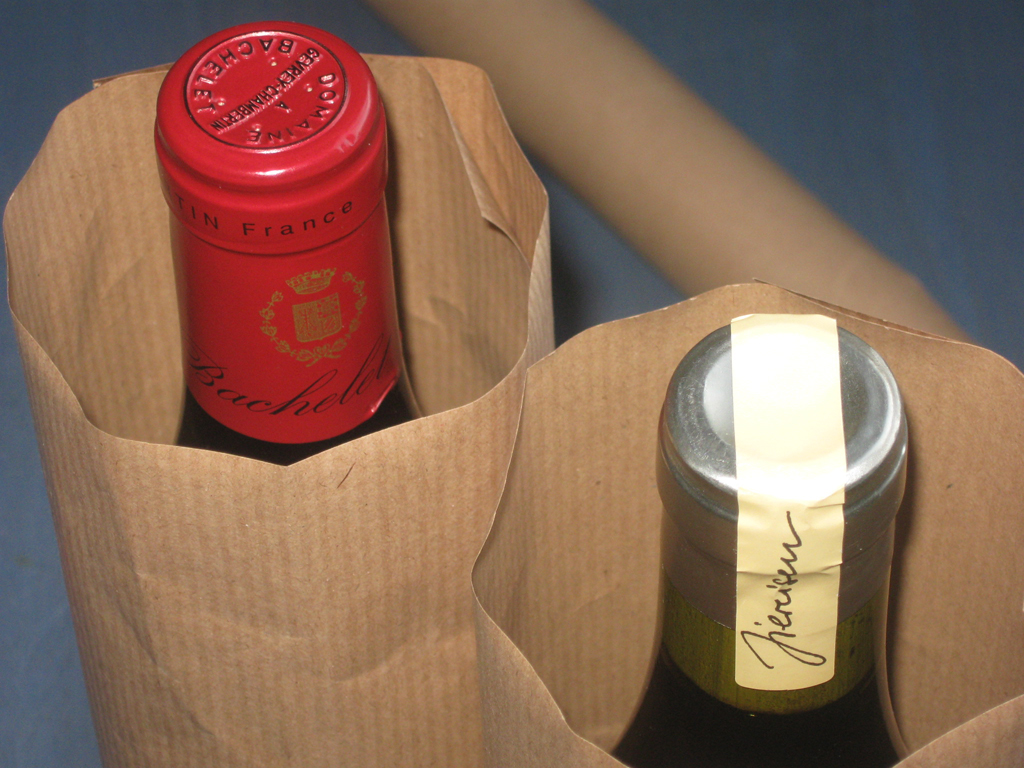 Here's what you need to know about this particular set-up: The concept: It was to be Pinot this time. We felt it had to. And I thought that since we had heard good things about Pinot in a little-known corner of Germany called the Markgräflerland, the time had now come to settle once and for all whether one of that area's local heroes can hold his own compared to a similarly priced burgundian. When we say similarly priced, we are talking 15 to 20 € range. For the Markgräflerland, that pricing already comes close to top of the line, while good old Burgundy could only send us a candidate from - wine classification-wise - the third row, which is a difference that should be kept in mind. 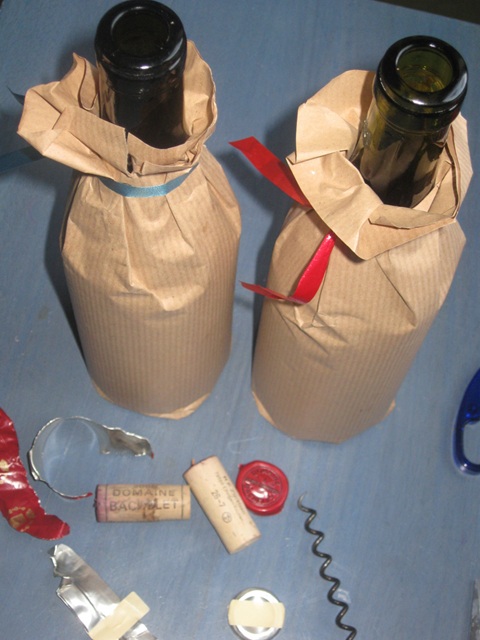 The contestants: Sporting the blue ribbon to go with its elegant paper-bag brown is Burgundy's champion, the 2005 Côte de Nuits-Villages from Domaine Bachelet, in the gaudy red ribbon, the 2005 Spätburgunder "Schulen" from Hanspeter Ziereisen. Which - just to remind those who have nodded of for a spell - we did not know.

Tasting notes (unfiltered impressions of four tasters, rather): "Marinated Cherries" is what was heard about the red-ribboned bottle, "black pepper", "cocoa and vanilla", "vegetables, broccoli", "underbrush", "mushrooms" "hazelnuts", "smoked bacon". On the blue ribbon, we got "darker", "like the photocopier in our office" [I want to work there, too! J], "Petrol", "fruit in rum", "bitter chocolate", "cherries", "mon chérie cherries", "like a cherry lollipop without sugar" [??, J], "a little leathery". Lessons learned: (1) Given the ease with which even we could tell french from german at a first sniff, until disproven, we take it that there is indeed a german style of pinot (think rose hip, berry fruit, cocoa), as opposed to a french style (think cherries, think dark chocolate). It is worth noting here that Hanspeter Ziereisen is a self-declared francophile when it comes to Pinot, so one could have fairly expected the difference to be less marked. (2) It would also seem that serious german Spätburgunder are most interesting at three to six years of age, while french Pinots can easily be kept longer, and (3) wild overgeneralising from fairly random tasting experience should be embraced as an integral part of wine snobbery. I think we're on the right track there. Ranking: I'll have to go subjective here, and refer you to the comments for different perspectives or dissenting views by other tasters: To me, the Ziereisen was the more eloquent, expressive and inviting wine. More mature, it opened up layers of fruit, with tension between the freshness of the "lighter" fruit and the onset of more mellow notes of age. The Bachelet, more youthful and more powerful, presented a harder, more polished surface that revealed less of what the grape has to offer. Ageability-wise, this clearly favours the Bachelet, which will certainly still be standing like a blooming cherry tree in may when the Ziereisen will already have sunken into the leaf-strewn ground. But that's not much use to anyone right now, is it? I feel somewhat vindicated by the fact that the german emptied noticeably quicker than the french. 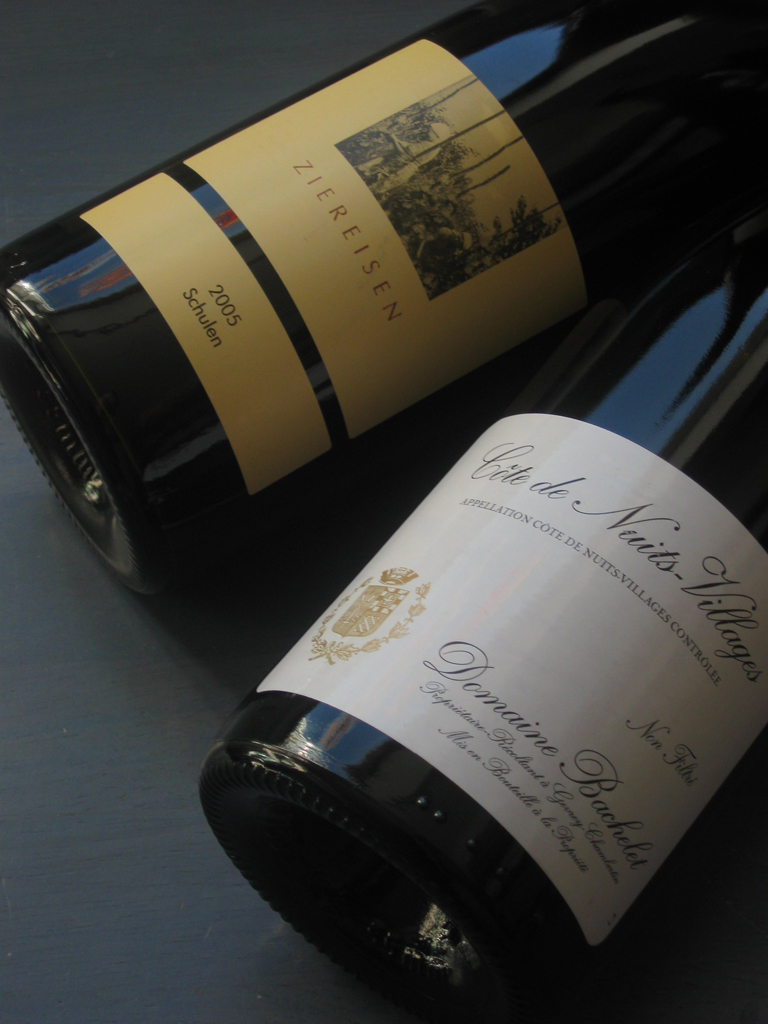 We leave you with this announcement: Our next blind tasting will probably feature Sauvignon Blanc, and at least one contestant from Germany and one from New Zealand will enter the ring. We are still looking for an appropriately attention-grabbing title. Suggestions submitted in the comments will be favourably considered.

It would be really interesting to repeat this tasting five years from now. Will I still prefer the German? How will the Burgundy develop? Will the Ziereisen stand up to the test of time? Maybe we will find out, maybe we won't, but right here I definitely prefer Ziereisen's Spätburgunder.

Call me an elitist...

Côte de Nuits-Villages is pretty basic Burgundy to be comparing with anything half-decent; even in 2005 I wouldn't be expecting much interest from a wine of this level. But then, I am an elitist (and bloody proud of it).

Elitist, but with a good point

No doubt you're right, not only about being an elitist, but also about the relative weakness of burgundy in the more affordable price range. The question of the tertium comparationis is a philosophical one here, I guess, and comparing two very different regions along the lines of price range is debatable. Both Torsten and I have swabian roots, so understand that we are genetically determined cheapskates to some extent. We want bang for the buck, no apologies, and I'll say this: as an elitist wine region, I think it's only right to hold Burgundy to the strictest standard at every level.

I guess the key question here is: how do you compare wine? Do you take the finest of two regions and let them fight it out? Or do you go for wines that sell at a similar price level? The latter may be difficult if you have to take into account exchange rates; also, wines from some regions have inflated prices, so they might find it quite difficult to compare on the same level as they price would also reflect international demand? On the other hand, does it appear to be fair to put a wine sold at 300 against one sold at 30 (Euro, Sterling, whatever)?

I still think, and this is what I have said about English wine for a time now, that you need to take the price into account - not for judging quality, but value. As Julian said, this may be my Swabian roots taking over.