Two years ago, I reminisced about student days and staircases. Last year, I got all corduroy trousers and turtleneck sweater about the term "elite". Somewhat disappointingly, this has not stopped Dallmayr, the renowned Munich delicatessen store, from again using the name Winzerelite (wine making elite) for their annual spring tasting of German and Austrian estates. Clearly, we needed to try another tack with Dallmayr, who this year actually invited us to attend as - imaging our proudly beaming faces - press. From a friendly chat with Dallmayr's public relations guy, we gathered that they were happy to have bloggers spread the word, but not yet sure how to understand their reach compared to print journalism. Not a scepticism that you often hear in the English-speaking wine world these days, but we were happy to rise to the occasion: a new journalistic approach was clearly called for here.

We decided not to come along with a preconceived set of questions but to actually let the winemakers steer the conversation. We asked the men and women manning the stalls to pour us just one wine, their most important one. That should not have to be the most expensive one, nor necessarily the best, we insisted, but simply the one most worth talking about. And then we tasted, and we listened.

First, we listened to the 2012 Silvaner "Freiraum", by Rainer Sauer from Franken. Sauer, based in Escherndorf on the river Main, northeast of Würzburg, is widely acknowledged as one of the leading estates of that region. That day, it was represented by young Daniel Sauer, who talked to us about his very own signature wine:

"Freiraum" - room to move, freedom. This is what my father gave me when I came back to work on the estate. I decided to make this wine, and give it this name to remind me and others of the choices involved in making it.

I was looking for more fruit than you can usually get out of a Silvaner, and a more clean and vibrant style than your typical earthy type. So I used cold maceration for 5 days, that is I left the must in contact with the grape skins (unusual for white wines) for as long, cooling it down so that the wine would take the aromatic extract of the grapes, but not start to ferment uncontrollably. Only after this time did I separate the must from the skins and start fermentation in steel tanks.

What could you have done differently?

Well, leave out the cold soak, obviously. That would have made it a "normal" Silvaner, more apple fruit, none of the more explosive fruit.

Could you also have extended the cold soak even longer, and gotten even more fruit out of it?

Theoretically yes, but it's a risky business. You need to control the temperature very closely, the longer the wine's in there, the greater the risk that some uncontrolled fermentation starts that you don't want. Five days seems to get the best results. I, for one, am happy with it.

We could well see why: An appealing wine, with explosive, slightly exotic fruit, fruit salad, a little washing powder as well, maybe due to the very youthful state. With quite an acidic bite, unusual for Silvaner of this quality, but giving it no lack of freshness. Whether it's necessary a good idea to give up Silvaner's rare virtues - which we have pointed out many times - for a frankly generic, though very attractive, polish seemed a little more doubtful to us. But a joyful wine to drink nonetheless. 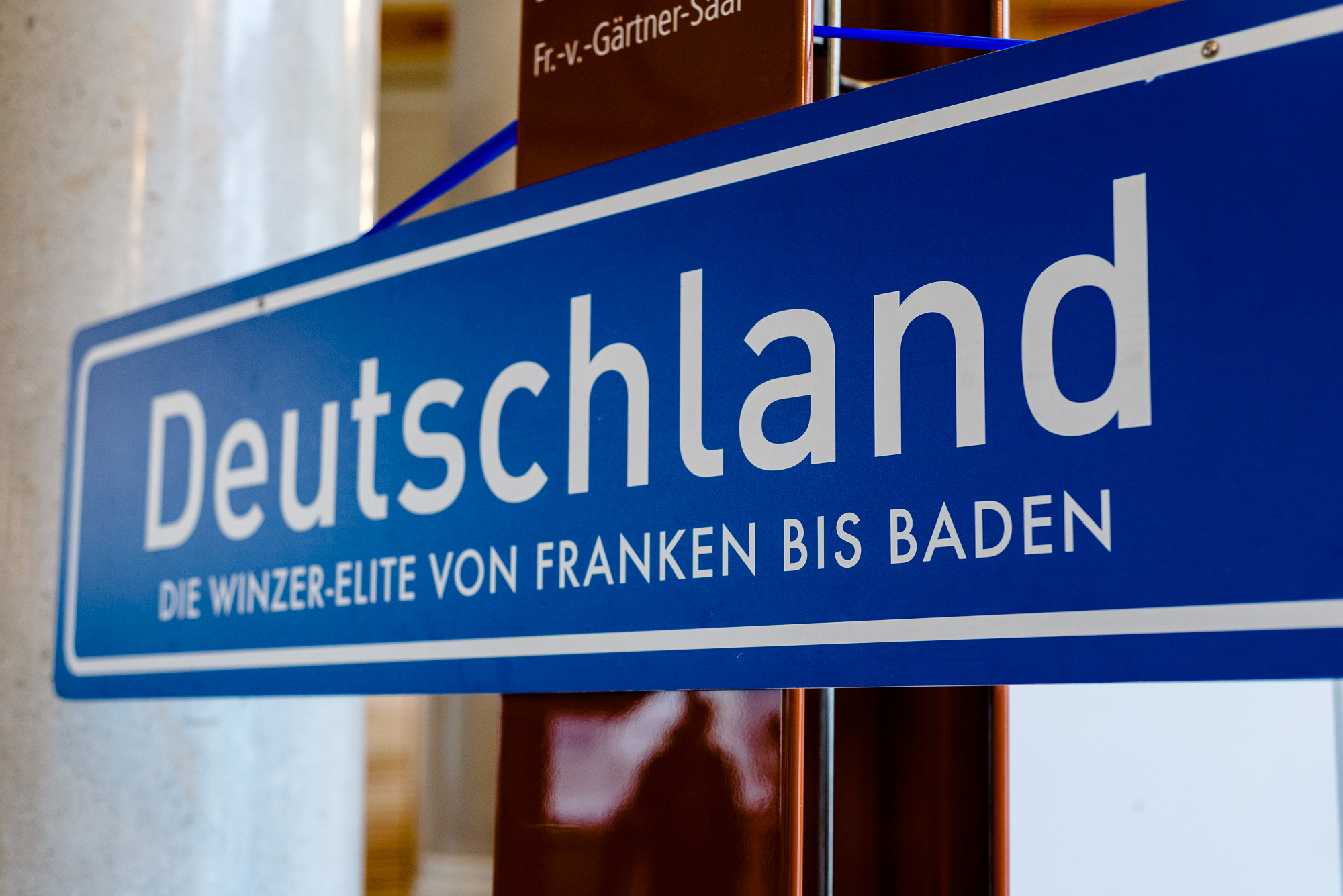 We have featured Peter Jakob Kühn many times on the Wine Rambler, as a pioneer of biodynamic winemaking, not just in his native Rheingau, but for a whole new generation of demanding and satisfying complexity in Riesling. The wine he presented to us was his 2012 Oestrich Riesling trocken "Quarzit". At the danger of sounding naive, why does this wine taste as it tastes, and what could he have done to make it taste differently?

I love living in a temperate, changeable climate - warmer seasons, colder seasons, very ripe harvests and leaner, fresher years. A world where every vintage tastes the same? How boring, how dreary.

My wines are made to reflect the conditions that they grew in, the changing of the years, this is what gives them their life and their character. Cold maceration and such - this is what you do to streamline wines, to give them a fruit profile that makes them blandly attractive. I leave the pressed must to ferment from natural yeasts, without temperature control. The warmth of the fermenting wine is a very natural thing, like a fever in a human body that has to run its course for the healing to begin. It's a very organic process to me, I would not artificially control it, this would result in a wine that is predictably the same every year, everybody would know how it tastes before having opened the bottle. How boring, how dreary.

The wine, like the vast majority of the Riesling samples, had gripping, tight acidity (It will loosen its grip somewhat while the wine ripens in the coming weeks and months), but great mineral clarity despite the yeasty haze that still covered it.

Dallmayr had asked those estates that could do so to also bring aged wines, preferably those ten years old, to the show. The 2002 (!) Zeltinger Sonnenuhr Riesling Auslese trocken ** by Markus Molitor was not only damnably good, it also accompanied one of the frankest, most diverting wine talks we ever enjoyed. Markus Molitor, that driven visionary of the middle Mosel, did not attend in person, but had sent a very knowledgeable colleague, great talker too, which was perhaps lucky. I'm not sure that the man himself would have talked to us so freely about the economics of marketing aged wines, among other (less publishable) things:

As a merchant, every day a wines lies unsold in your cellar, you're making a loss. Until very recently, all those estates that held back wines to sell after a few years of ageing were effectively paying for it, because you could sell these wines for no more than they would have cost young. So they, and that means us mostly, did it out of conviction, at great economic cost. It's only now that the tide turns, and older vintages begin to be sought after. Not so much by private customers, but by sommeliers, who value aged wines as food companions and for their rarity. In order to supply very good restaurants with an individual vintage to go with an individual dish that is on the menu for a season, you need a couple thousand bottles. There are some estates that sell aged wines, but very very few in Germany who can come up with that amount, and we are now beginning to do very well on our "freakish" business idea.

The wine? A freak, but in a thoroughly good sense: Smoky, stony, mineral. Herbs roasted on hot stones, peaches dried in the September sun. Outstandingly graceful and complex maturity. Sensational, even in hindsight and memory. A 2007 Kallstadter Saumagen Riesling Auslese trocken "R" from Koehler-Rupprecht, surely not the least among the German Riesling classics, while fabulous as well, had noticeably more aged aromatics.

The question of age in wine, and the right and wrongs of it, brings us to Roman Niedwodniczanski, the hulking owner of the Van Volxem winery of the river Saar. It would be wrong in a good many ways to compare him to Markus Molitor, but one similarity is beyond doubt: Both men had envisioned a style of Riesling that hardly existed when they started out in their respective regions, and both made real their vision against all economic odds. This man is conviction and dedication in every fibre of his body. Although his usual towering self, this time around he also was visibly uncomfortable with serving his customers what he had brought. Was there anything wrong with his wines, pray?

It's very important to note that these are barrel samples.

Ah, so that was it. Roman Niewodniczanski on to his favourite topic. Again.

It will taste different, very much evolved, once it's finished. I should really print a crossbones on the label as a warning

[interrupts to shout after a passing customer: "It's just a barrel sample. It will not taste like this when it's finished"]
Why then, are you offering your wines at this particular stage?

That's a sacrifice I make because Dallmayr ask me to. The principle of this tasting is to offer the current vintage for evaluation, and for people to judge and to buy. I understand, but I also know that this is a judgement that most "normal" wine drinkers are simple not equipped to make. Most wine amateurs cannot understand barrel samples.

The 2012 Saar-Riesling, Van Volxem's signature wine for many years, was indeed still in its baby clothes, but at the same time, Roman need not have worried: I remember it as easily the ripest, "warmest", most aromatically open and polished of the dry Riesling samples we tasted.