The surprising wines of Markgräflerland - a guest ramble by Simon Jones

Recently on this very site, we had a little discussion on the future of German reds going that put the spotlight on German wines in the global scheme of things. We enjoyed that. Making great sweeping claims about the future of wine is, after all, the bread and butter of any self-respecting wine blogger. What we enjoy even more, though, is when we can go regional on you, for there is nothing, really nothing that enhances the enjoyment of wine more than a sense of place. We can't do nearly as much wine travelling as we would like to, but we have been lucky enough to have very special guest bloggers reporting on regions and issues that they know intimately. This time, we have asked Basel-based Simon Jones, whose not-just-wine blog From Blackpool to Basel we recommend warmly, to share his knowledge about a patch of land that is not nearly as well known as it deserves to be. As always with our guest rambles, we invite you to do what we have done: Enjoy, and learn. 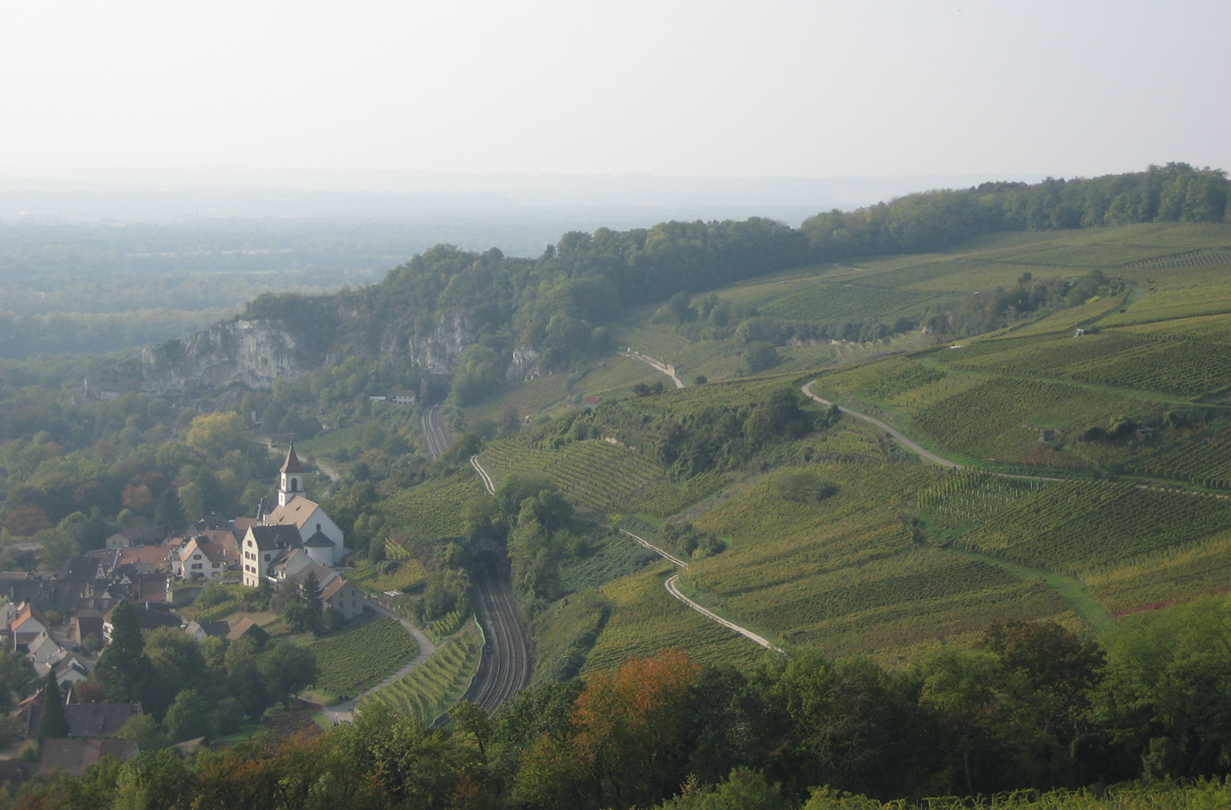 The surprising wines of Markgräflerland - a guest ramble by Simon Jones

For many motorists – and notoriously those with big German-made cars – the final stretch of the A5 motorway from Freiburg to Basel represents the last chance to rev up before Swiss speed restrictions kick in. Markgräflerland, the region they pass through, is but a blur and an after-thought. Twas always thus down here in Germany's forgotten corner – situated the farthest from Berlin, out of sight, out of mind. Yet in wine terms, among other things, we should be taking Markgräflerland more seriously. The region is not only home to Gutedel – one of the world's oldest grape varieties – but also boasts an increasingly impressive array of Pinots (Spätburgunder, Weißburgunder, Grauburgunder), the best of which are knocking on the door to the big league.

Like much of the rest of native Baden, wine cooperatives still dominate Markgräflerland, and this limits the region's consumer pull to a certain extent. Efforts on the marketing side – which the region's cooperatives help to subsidise – are also twee and unimaginative, to say the least. However, Markgräflerland's trump card is its cluster of Michelin-starred restaurants which are a magnet for lovers of fine dining particularly from the Swiss side of the nearby border triangle. Visit any quality Markgräfler dining establishment on a Sunday within the vicinity of Basel, for example, and you will invariably hear a good smattering of Baseldytsch. The region's more quality-conscious wine estates have been able to ride this culinary wave to good effect.

Gutedel is unashamedly the white grape variety of Markgräflerland. Much misunderstood – and better known under its "Chasselas" title in Switzerland, where it is the source of Fendant – it produces the wines which best reflect the nature of the region and its people, I feel: easily accessible, good-natured, yet with a surprising complexity that slowly creeps up on you. It took me a while to "get" Gutedel. Once you do, it can be surprisingly addictive. The flavour profile often hints at nuts with mild acidity. Top examples also show creamy freshness and lovely elegance. These wines are unique in Germany, but yield-cutting is essential to achieve good results. (NB: Not to be mistaken for Roter Gutedel, its obscure variant, which doesn't produce red wines but very nondescript rosés instead.)

Like much of Baden, Spätburgunder rules the roost as far as reds are concerned. The best the region has to offer can easily rival the Kaiserstuhl. In order from north to south, notable Pinot Noirs include those from Fritz Waßmer and Martin Waßmer (brothers with separate operations in Bad Krozingen-Schlatt on the river plain but with privileged plots on the slopes to the east, or, in Fritz's case, to the north-east in Northern Breisgau), Schlumberger from Laufen, Ziereisen from Efringen-Kirchen and Schneider from Weil am Rhein.

Pinot Blanc and Pinot Gris also deserve attention. In particular, they thrive on the chalky terroir such as that found near Basel (Weiler Schlipf, Efringer Ölberg). Put them in a blind tasting with some better-known French examples from across the Rhine, and prepare to be surprised. The local Chardonnay and Sauvignon Blanc are definitely worth a try too. 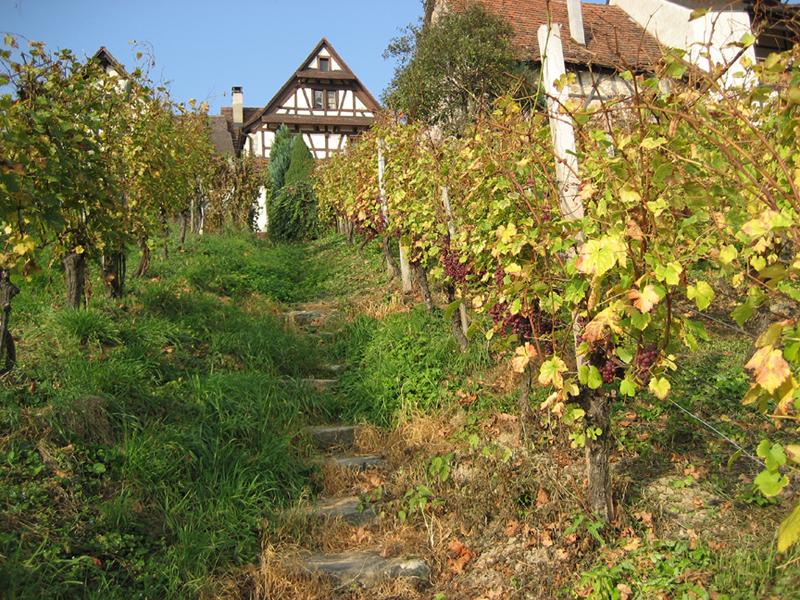 A lot of marketing drivel is written about "hours of sunshine" down here, as if this is the sole prerequisite for quality wine. However, it is still worth noting that Markgräflerland comes off better in the sunshine stakes than any other district in Baden. In particular, the southern extremities near the Swiss border benefit from a strange weather phenomenon called the Möhlin Jet. This nifty little south-easterly is, more often than not, the reason why the city of Basel and the areas directly to the north are bathed in sunshine while the central plains of Switzerland are smothered in mist.

Add to the equation Markgräflerland's bucolic scenery on the southern plains and foothills of the Black Forest, and you have a region with a lot more going for it than most BMW-driving execs whizzing past on their way to Switzerland would ever imagine.

Simon, thanks very much for this instructive piece. As far as I remember, I have only passed through Markgräflerland twice: once at the tender age of five or so, the other time on my way to Basel last year. There was not enough time to explore the area, not even to have a good look around - which is sad, because it seems I missed quite something. Next time!

In reply to Markgräflerland by torsten

(Excuse this rather belated reply:)

You're welcome, Torsten. Very much enjoyed writing it!
It's certainly worth a trip down here, if you get the chance.

In reply to markgräflerland by Simon Jones

Glad to hear that! It is definitely on my list of (wine) places to go to - so far I only passed through. I would also want to use the chance and explore Swiss vineyards...

The Black Forest has to be

The Black Forest has to be one of the most beautiful regions on this planet. I visited there when I was 16 on a school trip and have since taken a liking to crossing the border into Switzerland, where I love to visit Schaffhausen in particular. The first of your pictures, especially, does remind me of Switzerland yet, I could tell it was Germany due to the slightly dark tinge to it. It's really a striking picture -- one for the desktop I think. Best Wishes, Jennie