Autumn, wine tasting time – at least for the Wine Rambler. After my visit to the recent London Wine Show, both the London and Munich branches of the Rambler joined forces for the Weinherbst München (wine autumn Munich). A fairly large two day tasting, Weinherbst took place in the old town hall, right in the city centre of Munich. One day of sampling wines from some 70 producers cost 9 € (12 € on the door) - good value if you consider the amount of wine on offer. 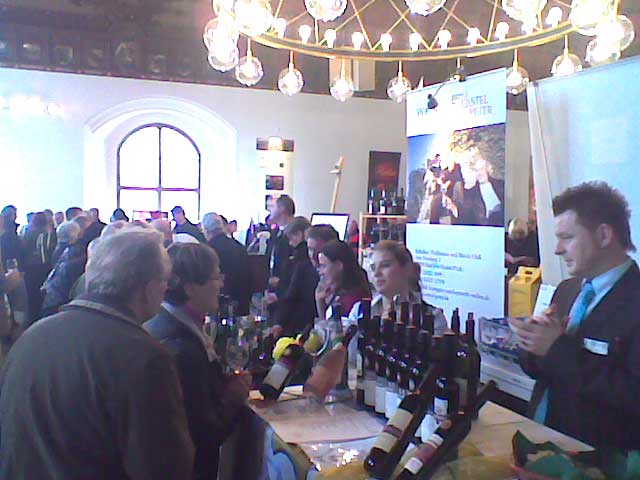 The old town hall is a great location for a wine tasting, especially the impressive ballroom, but unfortunately it was just so densely packed with stands that it eventually became a battle not only to get to a stand but also to move around. Because of the number of people it also got quite hot, which is hardly ideal for a wine tasting. A few stands less would have greatly increased the overall enjoyment. And we would also have had a suggestion on which stands to remove: while most producers came from Germany (about 90%, if I did not miscount), there were also a few random Austrian, Italian, Spanish and French wineries and wine merchants. Leaving those out would not only have given us much needed room, it would also have made the whole set-up more consistent. However, adding a few 'foreign' stands may have been a necessary concession to the Munich 'Schickeria' (the would be trendy and somewhat better off Munich in-crowd) who are very much into everything Italian and, if wine is concerned, also French and Spanish.

The Schickeria idea of tasting wine does also seem to be somewhat different from ours: there were no spittoons. Now I know what you may think: why would you want to spit out wine for which you paid money? The answer may be obvious to wine freaks, but the question regularly comes up when you talk to people who have not attended a tasting. The answer is pretty simple: the more intoxicated you get, the harder it is to really taste the wine. If you just want to get hammered that's fine, but it does not work for doing research. After a while and some 40 wines we just felt we could no longer do other wines justice and gave up. Why the organisers did not provide spittoons I do not know, it may have been a space issue. Most of the stands though had vessels that at least allowed us to pour away the wine after tasting a sip, but they were too small to spit out the tasting sample, especially as it was so crowded that it was not always possible to get back to a stand after a resupply run.
We discussed this with some of the winegrowers, who were as clueless about this as we. Like us they did have the impression that the audience were not really missing spittoons though and one vintner even remarked that from what he had experienced at the Weinherbst, the visitors mostly were the kind of people who, despite not liking a wine, still would down the whole glass because they just could not let anything they paid for go waste. 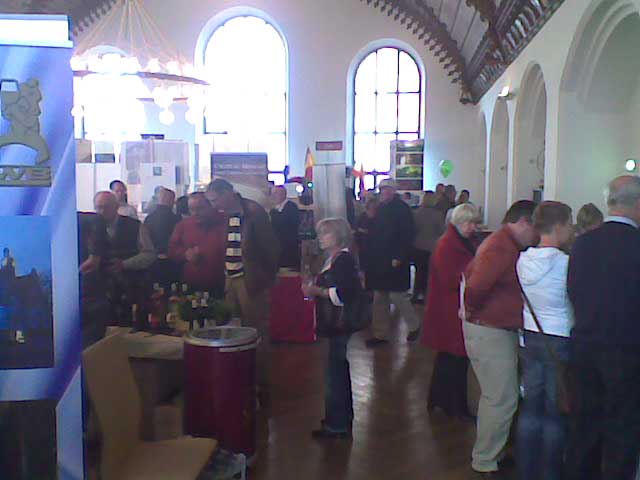 The Schickeria (an important word if you want to understand Munich) were also reasonably well catered for in terms of food and I have to admit I liked the truffle butter a lot. We did not sample the food systematically, but just standing close to the food stands was good fun. One of my highlights was a stand that, among other things, offered grape seed oil. While selling grape seed oil may not be terribly funny in itself, overhearing snippets of the conversations the guy running the stand had with his costumers led me to an interesting conclusion about marketing strategies for oil: While first hanging out there I overheard bits of a conversation on swine flu and why vaccination was not only superfluous but also dangerous. Initially I was a little confused why you would bring up swine flu when trying to sell food, but a second visit made it all clear: In the middle ages, customers were told, people used grape seed oil as an immunisation against the black death. If only, I thought, the Mexicans had thought about using grape seed oil to stop the spread of A(H1N1)... Wine does indeed seem to have magic healing powers. On Twitter there was a lot of talk recently about red wine making you immune to swine flu.

As we left the grape oil aside, we had to make sure not to miss out on the red wine, for instance the Pinot Noirs (Spätburgunder) from Dr. Heyden, an estate in Rheinhessen. There were, for instance, two Pinots from 2007: 'Tradition' (7.25 €) and 'Innovation' (15 €). 'Innovation' had been matured in barrique barrels for a while, while for 'Tradition' normal barrels had been used. We enjoyed both, though seemed to be a little more drawn to Tradition. Perhaps that is because we Wine Ramblers all happen to be historians. Either way, Heyden had the most consistent quality of all the producers we sampled. The Heyden wines had substance and there was a certain understatement that made the visit even more pleasant, especially in relation to the reds. We also sampled the 05 Cuvée Maximus, a more 'international' red wine, combining Pinot Noir and Merlot. Notable also the Silvaner and Riesling (Oppenheimer Sackträger), both made from old vines – old vines, I am a sucker for you!

Notable, in terms of substance (or 'subschtanz', as we Swabians like to say), was also a mineral rich Riesling – old vines – made by Heinz Schneider. Decent value at 8.90 €.

One of our favourite wines was the 2008 Scheurebe from the Hagenbuch estate that convinced us with lots of fruit and a very decent price – just 4.10 €! Sadly though, one of the other whites we tasted at the Hagenbuch stand was oaked beyond death; the oak taste was so intense that later on we could not even agree whether it was a Chardonnay or a Pinot Grigio (I am certain it was the Chardonnay Auslese, as my notes are quite definitive on this, but Julian disagrees).

We did also enjoy the wines from the Bach-Frobin estate: pleasant, refreshing wines that would be ideal companions for a good ol' German 'Vesper' (proper bread with various toppings, a lighter version of dinner, if you will). We noted the 08 Pinot Grigio and the Terrassenriesling, but most importantly the Kanzler Auslese. Kanzler is one of the lesser known, (for some) almost forgotten grape varieties (this reminds me of the forgotten presidents from the Simpsons) – the name translates to 'chancellor'. We made sure to have a sip, and one or three more, and a toast to the forgotten chancellors of Germany – Angela Merkel still has a long way to go before we can even think of dedicating a grape variety or even a toast to her. The Kanzler grape, for those of you who care, is a cross between the lovely Silvaner and the Müller-Thurgau.

Weinherbst München was a fun event, but it also felt quite exhausting and could have been so much better with a little more space and a few spittoons – I am sure we missed some lovely wines because of sensory overload...