There is not much I have in common with Cato the Elder. I am not a politician, I never gave a banquet in honour of Jupiter, my Latin is mediocre and I never supported a ban on women riding in carriages. I don't even drink much Italian wine. And yet at moments I have sympathy for the old grump, and that is when I end statements on German wine with: ceterum censeo you have to try Silvaner! In the UK, where knowledge on German wine beyond sweet Riesling is rather limited, this sometimes makes me feel like a lonely preacher, repeating the same mantra like a bumbling (rambling?) fool. Now imagine my joy when I finally met a man who showed me what real Silvaner obsession is.

Or Sylvaner obsession, as wine grower and maker Michael Teschke prefers to spell it. Michael's dedication to Sylvaner has turned him into a figurehead for the grape variety, so much so that some call him the "Sylvaner God". Interestingly, others refer to Micheal as "Arse Teschke" - and if you want to know how that actually relates to Sylvaner quality you will just have to read on.

Before we discuss the god and his arses (there is more than one, actually), let's remind everyone of the Rheinhessen wine trip. In October I set out with a group of internationally talented loonies (aka international wine communicators) to visit a group of nationally talented loonies (aka German wine makers). We visited Michael Teschke in the morning of the second day of our vineyard tour, and to me the walk across the Teschke vineyards became the highlight of the whole trip. It was partly because of the ever so beautiful Silvaner vines growing on fantastic rolling hills of Rheinhessen. 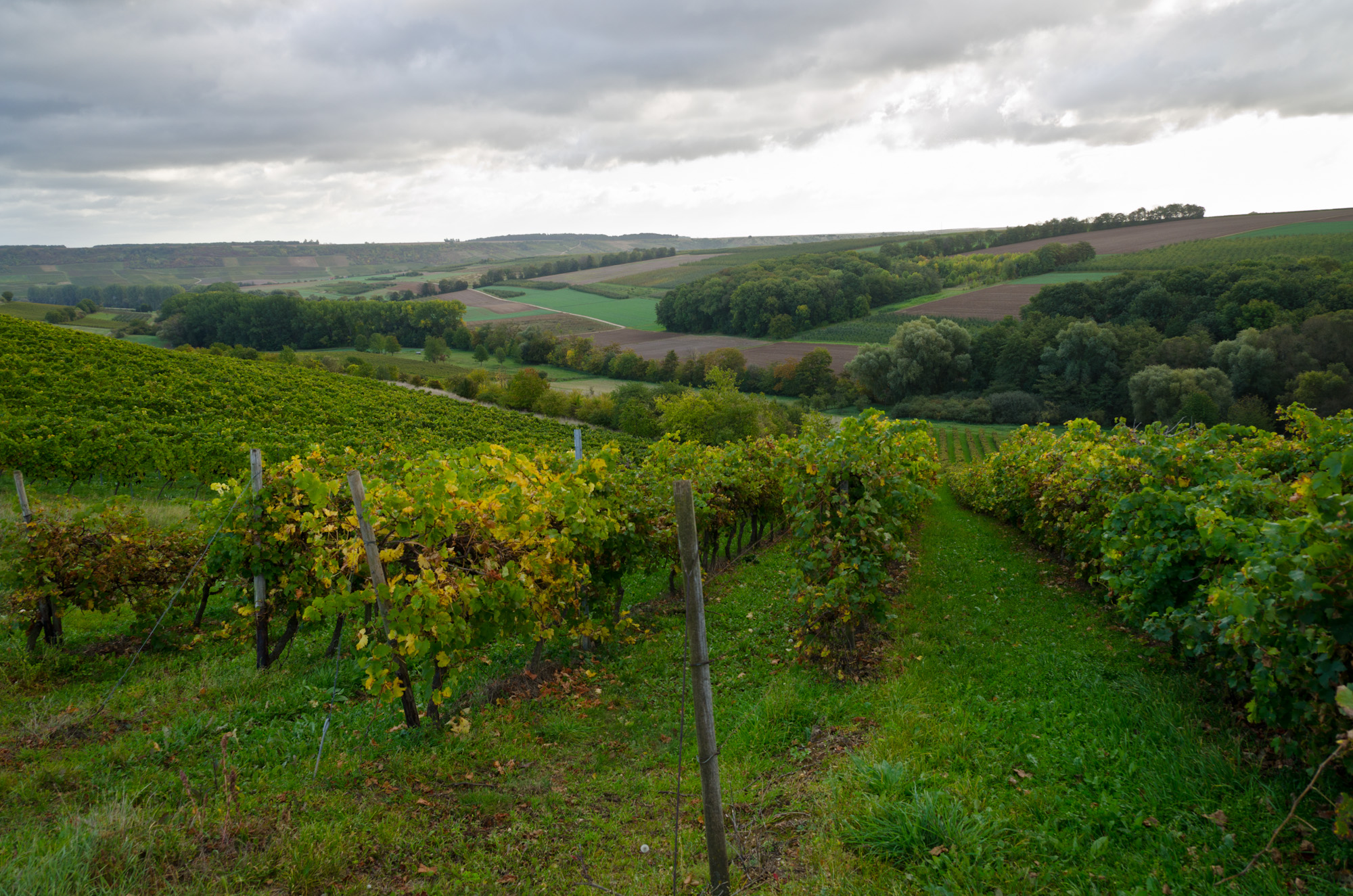 More importantly though it was because we had an actual argument about the merits of organic winemaking that was much more insightful than the usual wine maker - wine writer pleasantries.

Let's start with family history though. Having lost their home in East Prussia after the Second World War, the Teschkes settled in Rheinhessen as farmers and wine growers. It was only in the early eighties that Michael's dad started bottling his own wine. That is more unusual than it may sound, after all winemaking was neither his dream nor his passion. He lived a beer drinker, "made wine like a beer drinker" and in 1998 died, presumably still a beer drinker. Things clearly must have felt very different for his son Michael, who at the age of 30 took over the winery - not quite the way it was planned as originally it looked like he would make a career in the army, leaving his brother with the vines. 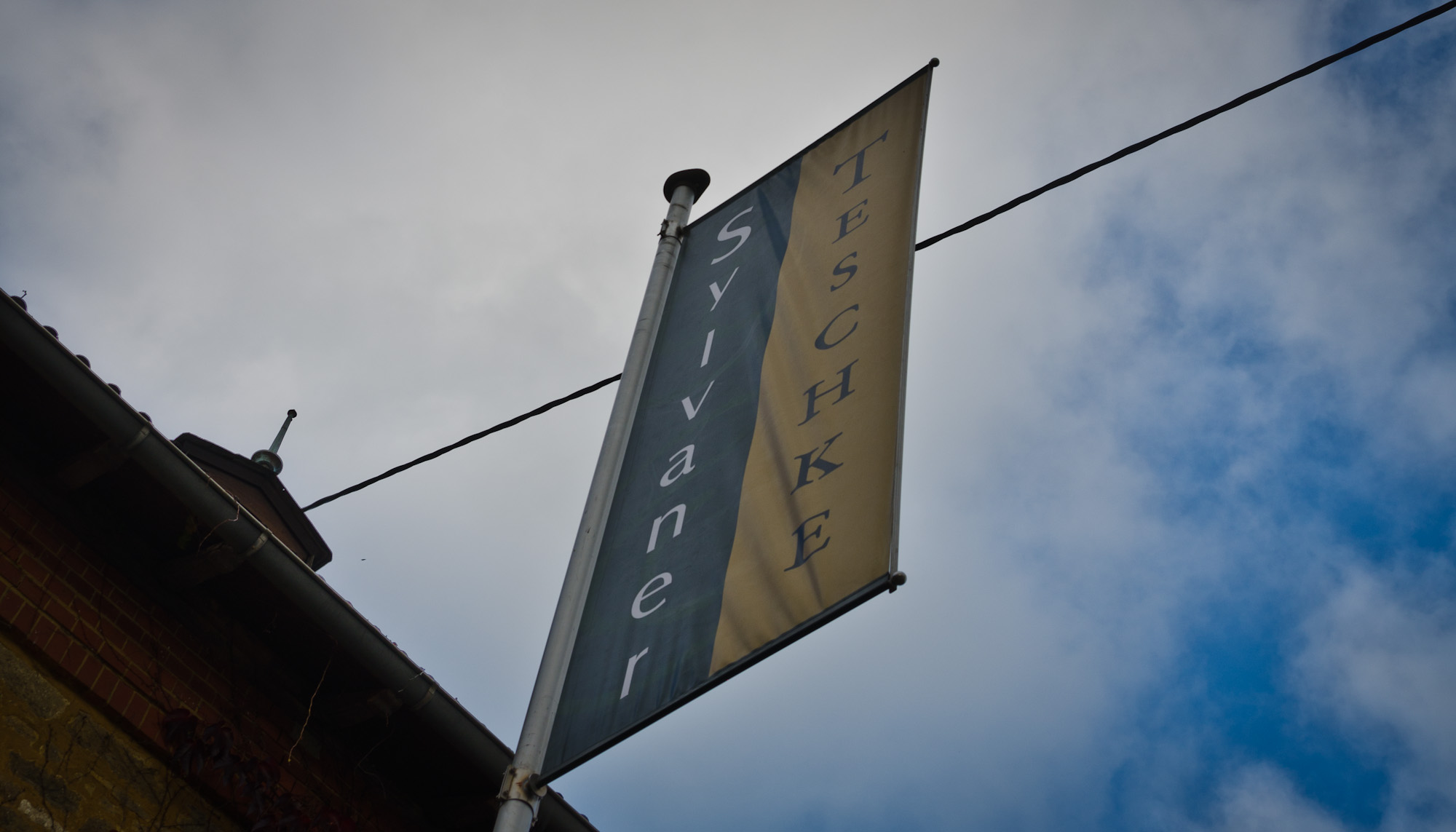 Now Michael looks after 7ha of vines on soils of shell lime and clay - Silvaner, Pinot (red and white) and Riesling mostly, but also the red grape Portugieser. Michael has no plans to expand the operation as his way of working (the word "freak" came up) requires him to be personally involved in every aspect of the wine growing and making. Michael Teschke clearly is a perfectionist. Interestingly though, and now we get to the philosophy part, Michael never used that word when speaking to us. Instead he spoke of love.

Love is at the heart of Michael's idea of winemaking. Winemaking is a way to let the vines and grapes realise their full potential, to "show the talents of the Sylvaner". According to Michael this needs dedication and love, and so it won't be a surprise that he deems these as essential criteria for selecting his staff: "Only people who love their work can work my vineyards." Now if you add to that the fact the Michael sports a ponytail and refers to the local water he uses in the vineyards as "peaceful" you might conclude that he is a hippy winemaker, embracing flowers, free love and biodynamics.

I don't know about the first, I did not ask the woman at his side about the second, but both of them were quite clear that they don't want to operate according to biodynamic principles. In fact, they even criticised organic winemaking, which got Michael into the aforementioned argument with the Danish member of our group, a strong supporter of organic methods. With "organic" ever more important in marketing wine, it may seem odd to find a winemaker opposing it. And yet this is exactly what Michael does.

Oversimplified, Michael's argument is that true organic winegrowing would be so challenging that it would only be possible with a massive loss of harvests - at least in regions like Rheinhessen, where the climate makes occasional spraying of crops a necessity. He also feels that organic, the way it is often applied, is dishonest in the sense that it cheats to prevent said loss of harvests, for instance by spraying copper sulphate instead of pesticides. How, Michael asks, can the spraying of a heavy metal be seen as more organic than the moderate use of pesticides that will be completely absorbed by yeasts during the fermentation? In addition to that, Michael also feels that true organic would also mean local - what is the point in shipping organic wine across the globe when that may have more impact on the environment than a non-organic wine produced and consumed locally?

There is much that could be said about this topic (for instance pointing to the fact that in some cases produce shipped across half the globe can have a smaller ecological footprint than local produce), but this is not the place to repeat a passionate debate in much detail. Personally, I would rather talk about winemaking that is focussed on quality and sustainability, but I am aware that this may just be exchanging one buzzword for another. What became clear though is that for Michael looking after the vineyard well is of the highest priority. Most of the time relying on good ventilation and high altitude works for him, but every so often he feels spraying is also needed - an intervention that increases quality, reduces loss of harvest and does not have to have more impact than some of the organic interventions. I cannot tell you how you should feel about this, but what I can tell you is that I felt Michael cared deeply, almost too passionately, for his vines - many of which he actually grew up with.

While Michael had some family tradition to fall back on, he is mostly an autodidact, driven by a passion for Rheinhessen Sylvaner (and Portugieser). When he took over the winery this led to a lot of experimentation, of working out what he feels is the best way to unleash the vines' potential. Michael also has his own idea of how to communicate the quality levels of his wines, and this is where we get to the arse story. Instead of using the traditional German "Prädikat" classification of Kabinett, Spätlese etc. Michael classifies his Sylvaner by Prädikatsärsche - quality arses, or shall we say quality butts. So a two butt Sylvaner is better than a one butt one, with the one butt and one buttock Sylvaner somewhere in the middle. It is not too difficult to imagine how this idea came about if you know something about the complex German wine classification, but why it stuck I don't know as Michael for some reason did not mention his Prädikatsärsche to us; maybe he thought it was too German to explain in the time we had to taste some of his wines.

Which neatly brings me to the wines we tasted. All of them were Sylvaner - including Blauer Silvaner, a type of Silvaner with dark coloured skin that is something of a rarity. Having tried seriously old Sylvaner I was not surprised that these wines can age well, but I can report that my international colleagues were quite impressed how much vitality the older ones still had. I also liked the minerality, for instance in the long mineral tingle that the otherwise more medium finish of the 2003 left on my gum; this was probably the most robust Sylvaner we tried at Teschke (it also had 14% ABV), combining fresh citrus aromas with a more juicy, stone fruit, herb and honey touch. My favourite was probably the 2002 Sylvaner trocken that combined a nose of dried apricot, yellow apple and other ripe fruit with a somewhat oily viscosity, good minerality and a surprising amount of freshness. This should be a very versatile food wine - but it also needs no food excuse to be enjoyed.

Michael tends to harvest grapes late, sometimes very late - the 2003 Sylvaner was made from grapes harvested in three batches in October, November and even December -, and Michael also matures wines on yeast to give them more depth. "Yeast is the mother of the wine", is how Michael explains the "wine family" relationship he cares so much about - "one month on yeast equals one year of possible ripeness." It is not only the old wines where you can feel this substance. The 2007 Sylvaner "Vom langen Sterck", for instance, is a more full-bodied wine that yet again combined ripe fruit and nut aromas and flavours with creamy texture and great acidity. I also enjoyed the younger wines we tasted, although in a couple of cases I felt that, compared to the more mature ones, they were not quite finished developing their potential.

So there you have it, complex Sylvaner from Rheinhessen, a region that has a reputation for producing bland wine in bulk. Inevitably, I now have to steer this to finish with my usual exhortation to try Silvaner (or Sylvaner, I don't care, as long as you try it). And let's face it, there is no way around it - but after the visit to Teschke I know I am not the only obsessed German telling the world "you have to try Silvaner"!

Great Post! Never been to Teschke. I guess I have good reasons to change that soon. Cheers

Good post, and lovely photographs. Probably the most memorable visit of our trip to Reinhessen, I thought – he was a memorable character, and not having tasted much aged sylvaner before I was blown away by some of his wines (so much so that I bought a couple, which are still sitting at home, waiting for the right occasion). I must stick up my own blogpost about him, sometime soon...

It is good Wine Rambler policy that we don't comment on the awesomeness of each other's postings, but I have to make an exception here: The Rheinhessen series is wine infotainment at its finest, and I can only hope our readers enjoy it as much as I do. Surely a three-arsed rating is well merited here.

Thank you all for your comments, gentlemen. I am very happy you enjoyed this even more so as I wrote this with one of the worst colds ever and hence without a glass of wine by my side (let's not start the argument whether writing needs alcohol, although the journalist in our group might have something to say about it).

@Aex, yes, you should visit. I'd particularly recommend getting Michael to show you around the vineyard and explain his approach. It was one of the most passionate "meet the winemaker" experience I have had and very different from some of the marketing pitches you get at wineries that have "professionals" run their tasting room.

@Simon, I agree, although Königsmühle also left a lasting impression, albeit for other reasons (not bad ones, I hasten to add). If you need help drinking those wines (I travelled hand-luggage only and could not take any), you know where to find a friendly assistant.