Waitrose responds to open letter about "Legends of Germany"

Earlier this year I published an open letter to Waitrose that within hours became our most widely read, tweeted about and "liked" article of the year. I had criticised Waitrose for stocking a wine that pretends to be "one of the most renowned wines of Germany" and yet is only a generic blend that may not even be from the Mosel village whose name it displays on the label. I had always seen Waitrose as a retailer that champions German wine and so I was disappointed when I discovered the so called "Legends of Germany".

Since the publication of the article Waitrose have gotten back to me with a response.

In fact they did better than that and invited me to a tasting of German Riesling. With some outstanding wines presented by actually renowned producers the tasting showed the commitment to German wine Waitrose is known for. It was also a good way to learn more about how the Waitrose wine business works - and to discuss the "Legends of Germany", of course.

Before I go into the Waitrose response let me say that legally there is nothing wrong with the wine. The German wine law allows labelling wines as "Piesporter Michelsberg" even if the grapes don't come from the ancient, world-class vineyards of Piesport. German bureaucrats have to be blamed for allowing some producers to cash in on, and in the process damage the reputation of Piesport with their cheap, mass-produced and often dull blends. So in the first instance my beef is with the Germans who label bland blends as "Legends of Germany" and sell them as "one of the most renowned wines of Germany". 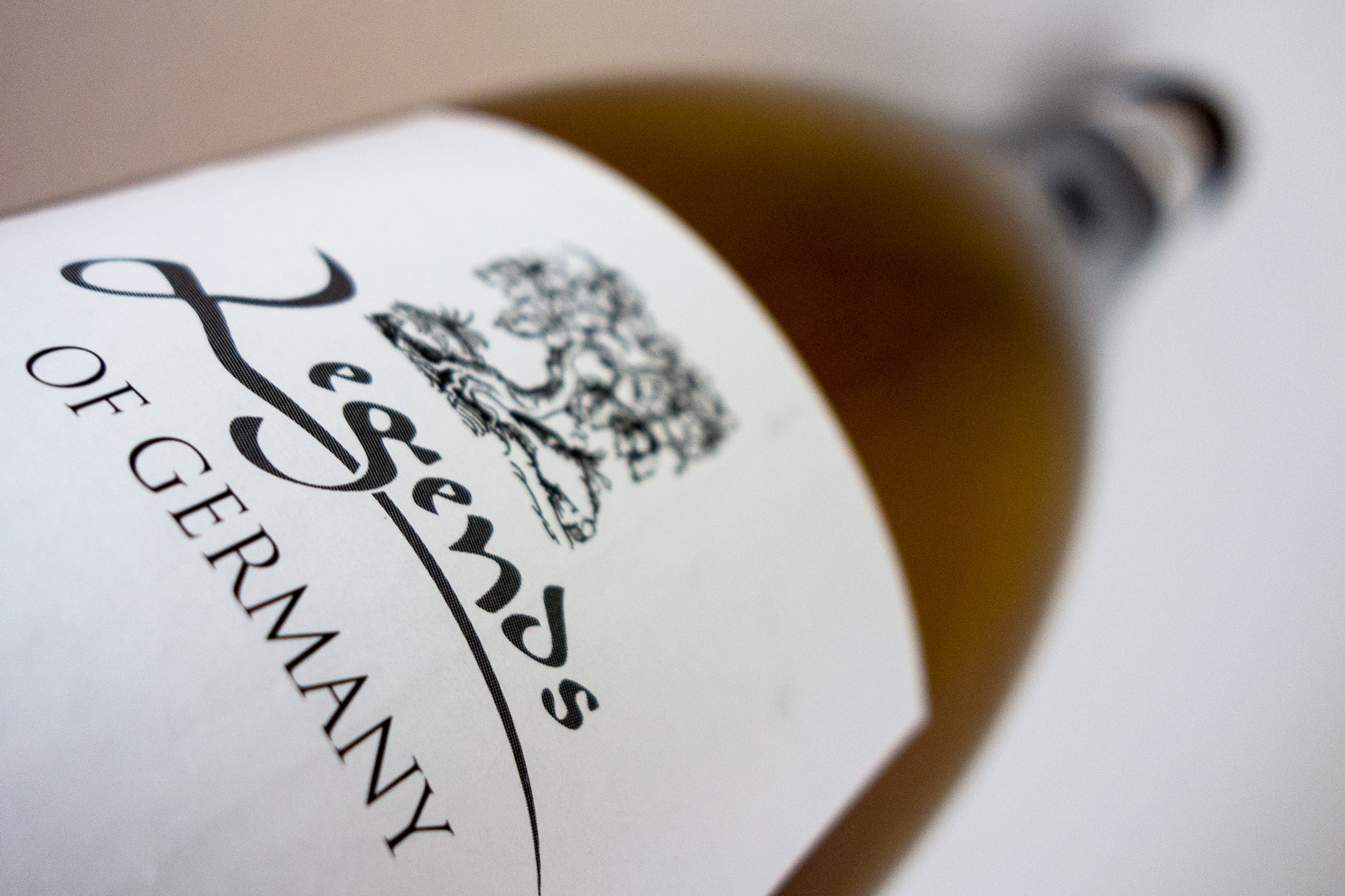 Waitrose, to be fair to them, make no such claims, even though they still do reference the "picturesque" village of Piesport on their website. However, I would argue that by selling such a wine, no matter at what price point and however lowly placed on the shelf, Waitrose do support the statements of the producer.

Waitrose argue that they have selected this wine as customers want a lighter, fresh white wine at a lower price point and that "Legends" is good value and can serve as an introduction to German wine. From my extensive experience of tasting the cheapest German wines available in UK supermarkets I have to agree that "Legends" is one of the better ones, but that is of course a relative statement and would also have to reflect that at £4.89 it is one of the most expensive (Asda sell their Piesporter for £3.75). Personally, I don't consider any of these wines value, but they are cheap - cheap enough, argue Waitrose, that customers could not be mislead into thinking this was actually a world class wine.

In my view this means that Waitrose are either educating their customers not to trust information on the label or not to see German wine as a high quality product. Neither is the message Waitrose want to send, I believe.

Now, they have assured me that they would discuss this matter with the supplier and see whether the labelling can be changed. One of our readers, who wrote to Waitrose and received a similar reply in writing (see below), called this "bs" - but having spoken to them in person I do believe that this is actually their intent, and I applaud them for responding to criticism. Even so I do wish that with all the wine knowledge at Waitrose they had considered this issue before stocking the wine or that they would decide not to sell it in the future if the supplier does not change the branding. This is, after all, about trust in labelling - something the wine trade should be concerned with - and, in particular, the issues around "Piesporter" and German labels that have troubled German winemakers who work so hard to restore the country's reputation for world class wine.

Whatever you think of Waitrose's statement you will be able to judge their actual response later this year by checking the labels of their entry-level German wines. I hope we will see a change - and I will be back to check.

This is the response our reader received from Waitrose and which he asked me to publish:

With reference to your email our buyer would like to advise that at Waitrose we are committed to providing quality and value for our customers, and we are proud of our long-lasting and sustainable relationships with producers. Nowhere is this more true than in Germany, where we have a range of around 15 wines from £4.29 to £25.99. The majority of our range sits well above the average price of a UK bottle of wine. We also work very closely with the suppliers you mention.
In fact we have organised tastings with Ernst Loosen (the next of which is on the 2nd May in Canary Wharf, which you would be most welcome to attend). Here are the wines that will be on show:
The Naked Grape Riesling - made by Ernst Loosen for us.
Dr Loosen Urziger Würzgarten Riesling Kabinett 2011
Dr Loosen Erdener Treppchen Riesling Kabinett 2011 MAGNUM
Dr Loosen Urziger Würzgarten Riesling Auslese Gold Capsule 2007 1/2 s
Johner Enselberg Pinot Noir 2008
Leitz, Rudesheimer Riesling Kabinett 2012
Donnhoff, Kreuznacher Krotenpfuhl Riesling Spatlese 2010
The particular wine that you mention is representative of the cheaper end of our range. It is popular and sells well, and shows exceptional value for money. The price is clearly indicative of its relative quality, to other much more expensive Mosel-Saar-Ruwer wines in the range. There is no intention to mislead. The wine is the cheapest wine on display and makes no claim of being a single estate wine. The wording is purely a labelling and branding decision with the supplier, but we are happy to discuss a change with them for the next print run, bearing in mind any disproportionate or business-threatening costs to them of new trademarks, practical labelling and procedural implications.
Please be advised that we have not received any other complaints with regards to this matter.
Once again, thank you for taking the time and trouble to e-mail us. Should you require any further assistance please do not hesitate to contact us on 0800 188 884.

Let me finish with a response to one of the points made by Waitrose. They do rightly say that the "Legends" makes no claim to be a single estate wine - which could be taken as an indication that it *may* not be a high quality wine. However, I would be very surprised if many UK customers understand this or, even if they do, whether they can look at a wine label that says "Dönnhoff Kreuznacher Krotenpfuhl Riesling" and break down the components to understand how to judge this against a wine from trustworthy Waitrose that says "Legends" and "renowned" on the label. Also, when you sell a product I don't think you can think of it as "purely a labelling and branding decision with the supplier".

"purely a labelling and branding decision with the supplier"

Like you I think that a retailer such as Waitrose is effectively adopting the statements a supplier makes by deciding to sell the wine, so they should not hide behind the supplier. So either defend the statement, if you feel it is right, Waitrose, or have it changed when you get new wines in.

I have to say that I regard

I have to say that I regard their statement "Please be advised that we have not received any other complaints with regards to this matter" as more than slightly disingenuous. I regard myself as having complained to them via twitter. I think they've compounded what was a slightly crass marketing error with a poor response. This isn't what I associate with Waitrose and reflects badly on them.

Sorry to hear that you did not seem to get a response. It is not my job to defend Wairrose but I do know that at the time their Twitter account was not very well staffed, so the odd comment may have slipped through - not that it should, of course. Feel free to contact them again.

I do know that other readers also contacted via email or letter Waitrose, for instance Alexander, who just the other day left a comment on my original post.

I have now received a

I have now received a response from Waitrose, within 4 days, which is fair enough in my eyes. Truth be told, the response to my substantial criticism was entirely contentless and meaningless, but at least they replied. :-) Canned text follows:

"Thank you for your e-mail.

We are always striving to provide the best quality and standards in our products and services. I have passed your comments onto the relevant department. Your feedback will be noted for consideration at their next review.

I would like to thank you again for taking the time and trouble to contact us. Should you require any further assistance please do not hesitate to contact us on 0800 188 881.