Lost in translation - A sentimental german song explained, and a greek wine (after much rambling) reviewed

Who could know better than people who call themselves Wine Rambler that sometimes a wine needs to be approached sideways. Especially if we are nervous about a wine because we know little about it and fear that we may have gotten it wrong. So we'll start with a little tune – bear with us – and will, after somewhat aimless rambling, at the end of this post – promise! - get fearlessly tasting. It starts with a non-translatable German word Schlager. „Kitschy songs in the vein of Barry Manilow or Chris de Burgh“ would probably be the the way to explain it to the anglophone world. Anyway, one of the best known Schlager is about Greek wine, so brace yourselves:

This is what a couple of Greeks in a tavern tell a German whom they have invited to drink with them, it being cold outside and him having time to kill and nowhere to go. Starting with the proposition that neither the song's musical quality nor its mimically powerful performance by Udo Jürgens, our Germanic crooner here (wait for the jacket-twirling in the end!), can by themselves account for its lasting success, we will now advance two theses and you'll have to take our word for it that they will somehow bring us closer to today's wine: Ostensibly about wine, the song really is one of the many ways German popular culture has come to term with what all sensible people now acknowledge was immigration, although at the time it was seen as a more limited engagement of „guest workers“, from southern Europe. So it seems to me that – first thesis – this song is liked because it has told Germans many reassuring things about these new and strange people in their midst:

There brown-eyed men with black hair were sitting And from the jukebox, the sound of music that was strange and southern

No need, though, to actively welcome these people, or integrate them, since they are so wonderfully open and gregarious themselves:

When I was noticed, somebody stood up and invited me in.

Better still, since they are desperately homesick, nobody need fear that they may overstay their welcome:

They kept telling themselves: Someday, it'll be back home again with the savings, for a life modest and happy

The second thesis is that even that is beside the point, since really this is not about Greeks at all: It is ultimately about Germans, and their own endless fascination with all things Mediterranean, sunny and southern, and the song's greatness and appeal lies in how it manages to project this onto the Greeks themselves. So that's our cultural studies seminar done, and it has given us the background story for our wine. Namely, that Greek wine has, until fairly recently, been consumed outside of Greece like it has been used in this song: as a sentimental code for a place of longing, because it reminded people of their holidays rather than because they actually liked the wine for what it was. A misunderstanding, surely, from the point of view of those Greek wine producers who have set out to take Greece where Italy has gone before, and to prove that, quality-wise, its wines have world class potential way beyond their touristic and exotic appeal.

Which brings us to Markus Stolz, a.k.a. Elloinos, a former investment banker who has heard the siren's call and is now pouring his heart's blood into being a restless social media ambassador for Greek quality wines. We let some of his enthusiasm rub off on us and let him know that we were interested in featuring greek wine on our site, if he knew a good way to introduce us to it. Within days, a shipping of four bottles had arrived. Many thanks for that. But there is one more sinister turn of "Griechischer Wein" we have to take first, and that is that even the most reassuring song can take a frightening turn when misunderstood: In his wonderful essay on the power of mishearing "Der Weiße Neger Wumbamba" (a book the Wine Rambler recommends for every German-speaking household), journalist and author Axel Hacke relates that one of his many correspondents kept hearing the central line

not as a tearful reminiscence, but, inexplicably and unforgettably, as a desperate warning:

Don't crawl in there – it's blood from the earth

Axel Hacke comments: "Everyone will have a hard time ever hearing the song correctly after this". Indeed. 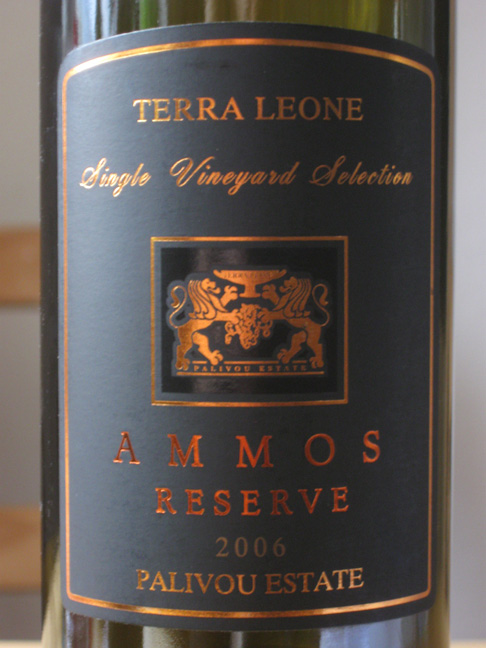 So, finally, we have a Single Vineyard red before us, from Palivou estate's premium line. It is made from the indigenous Agiorgitiko ("St. George's") grape and harvested in vineyards around Nemea, on the Peloponnesus, Corinth region. Let's crawl right in: A very dark cherry red in the glass, this brought sweet cherry juice, blackberries and a little fruit jam to our noses. The mouthfeel is, again, dominated by marinated cherries, dried fruit, and a chocolate pudding aftertaste. It's a measure of the quality of the winemaking that this overripeness does not pull it out of balance, but a gentle tannic backbone wraps up the taste in the end. We'll be honest: This is a convincing wine, very competently made, that blends Mediterranean sweetness of fruit with new-world ripeness and juiciness. We were somewhat reminded of the (very few) Portuguese wines we had tasted.

Many will find it seductive, smooth and satisfying. It is, however, not our cup of tea. We can't find anything wrong with it, it's just that what we look for in a red these days is freshness, focus and a certain stony or earthy backbone, and we found too little of this here to really make us happy. This is not the blood from the earth that Udo Jürgens was singing about. It's more like the sweet, sweet juice of the vines. We are looking forward to the other three bottles, from Palivou's more basic line, and will report on them in the coming weeks and months. And so let's end it for this time with Udo Jürgens, and an extended, orchestra-backed version of his classic. Take it away!

Thank you very much for taking the time to write this up. As most Germans I have heard the song numerous times, but I actually never took the time to listen to it. Also, I never really took the time to listen to Greek wine (after a holiday excursion in 1992, which was memorable for many things, but not for wine quality). This wine certainly has something to say and, as you point out, it is well made and enjoyable, just not quite my style of red. If you like this type of wine it is certainly worth exploring and like my co-Rambler Julian I am now curious to try another Greek wine soon.