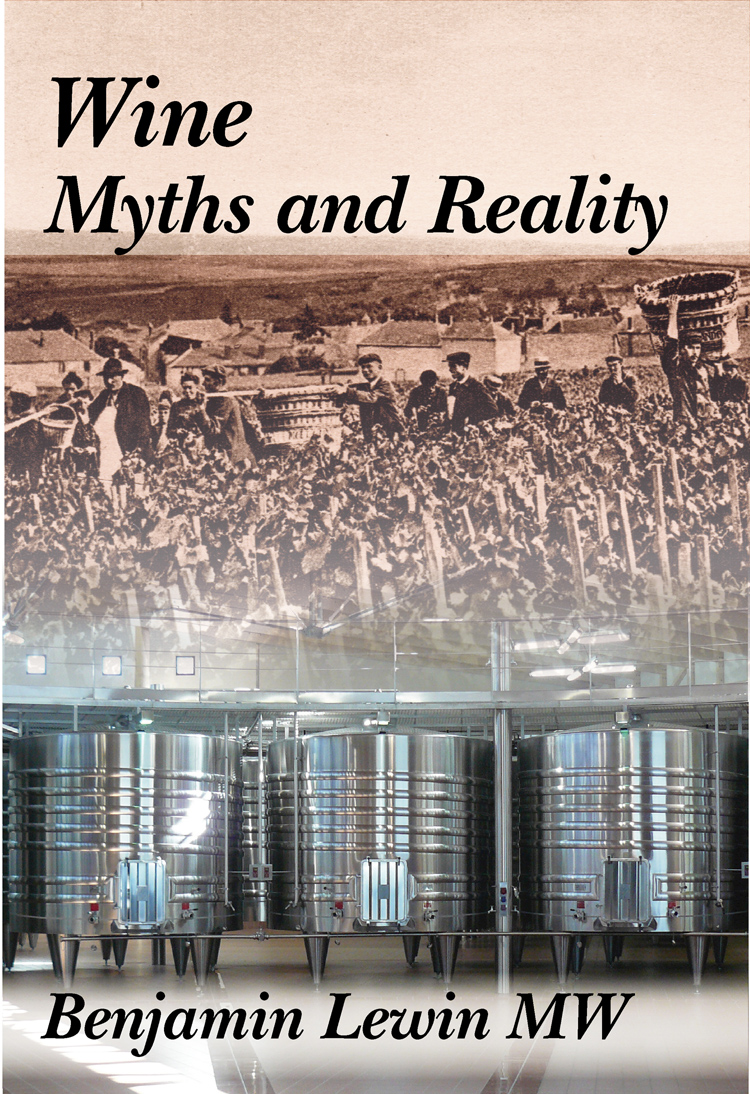 "From monks treading grapes in the middle ages to the latest research into grapevine DNA, this compelling book presents the authoritative account of how wine is really made.", this is how the publisher describes Wine Myths and Reality. If you don't obsess too much about the claim to the as opposed to an authoritative account, you may find this description not too far off for most of the book. Lewin does indeed take a broad look at winemaking and deals as much with its history as with the biology and chemistry behind it.

Wine Myths and Reality is divided into five sections, two of which address specifics of the old and the new world, and one each on: "growing grapes" (everything from vintage variation to organic viticulture to the life cycle and history of the grapevine), "making wine" (malolactic fermentation, yeasts, filtration, sulphur, oxidation and and and) and "the world market" (wine critics, wine fraud, supermarkets, taxation and many other aspects of the influence the market has on wine). The table of contents reads like a textbook for the exams of the Institute of Masters of Wine, and the text is well documented with scholarly footnotes. So it may not come as a surprise that Lewin holds both the title of Master of Wine and a Ph.D. from Cambridge - he is also the founding editor of a respected academic journal on biology.

Fittingly, the book is as full of facts, scientific pros and cons and information on wine as you can possibly cram into some 600 pages. Lewin really tries to cover everything. That's obviously an impossible task, especially with the page limit. So depending on your interest, you may miss details on some areas (what about North Africa, Eastern Europe or England?) or could be tempted to argue that the balance is not right (does it really reflect the wine world to discuss the US in forty pages when Italy has only thirty?). Within the page limits though I find Wine Myths and Reality as rich in information as can be and quite an achievement - even more so as it remains surprisingly readable when you consider it deals with topics such as the density of cells containing taste receptors on the tongue of super-tasters or phenolic ripeness.

The historian in me also likes how Lewin never seems to lose track of the historical context. For instance, when he discusses the concept of "terroir" Lewin easily moves from a discussion of whether trace elements in the soil can affect the taste of wine to the fact that even in Roman times different wine regions were classed according to quality. In fact, combining historical with scientific perspective is, I believe, what led Lewin to the main argument of Wine Myths and Reality: wine is (was and will be) a product of human intervention, and to understand it properly you will need both science and history (plus an understanding of market forces), not preconceptions based in myth. Humans, argues Lewin, created the artisanal, supposedly more natural vineyards of the old world as much as the technical, supposedly more artificial ones of the new world, and none are inherently better than the other.

Similar arguments and examples run through the book, organising the discussion of so many different topics along this leitmotif. With regards to filtration, for instance, Lewin has the following to say (well, actually he has four pages on this topic):

"Wine is a living thing." You see this said time and time again. From this comes the concept that if you filter the wine, evisceration is inevitable. But no, wine is not alive; and if it provides a home for living organisms (bacteria or yeast) it will very likely be spoiled in short order. Certainly wine (or at least higher quality wine) is not static but evolves with time; and certainly we can ask what components are removed by filtration, and to what extend they might be necessary for this evolution. But let's base the discussion on a clear understanding that wine is a mixture of water and alcohol containing dissolved components, or perhaps more accurately, that it is what chemists would call a colloidal suspension, in which some of its components aren't really dissolved into the liquid but rather are very fine particles suspended in it. If wine is a "thing", it is chemical not biological. (pp. 101-102)

It would not be right to reduce Wine Myths and Reality to a book that makes a scientific or historical argument. It is a fountain of knowledge on most things wine - so much so that I won't even start giving a more examples as this would turn this paragraph turn into a long, long listing. You can read it as a book or use it as a quick reference to topics you are interested in. The chapter on Germany and Austria, for instance, has a good introduction on the wine classification systems of both countries and issues such as sweet vs. "trocken". And no matter how often I look at it I get excited about the table classifying the terpenes (organic compounds) that give Riesling (and Gewürztraminer and Muscat) its distinctive flavours. Did you know that nerol creates lime aromas, whereas cis-Rose oxide is responsible of lychee?

As much as I applaud the research that went into Wine Myths and Reality, I don't agree with all of Lewin's statements, and not all areas are as well covered as they could be. For instance, saying that "scarcely any" wine made from Silvaner is "of any interest" (484) seems to indicate that Lewin should look more into German wine beyond Riesling and Pinot. Similarly, my English wine friends might raise an eyebrow at the statement that southern England could become "an attractive area for producing high quality sparkling wine." (75) These are mostly minor points though, and it is only to be assumed that on over 600 pages everyone will find something to disagree with. This is not necessarily a bad thing though, especially as the main argument is worth talking about, and the book can be recommended to anyone with a serious interest in wine. I particularly enjoy the skilful blend of historical and scientific argument that drives home the point that there is nothing about winemaking that is not man-made - which means it should be discussed and analysed with reason.

I bought this book on the

I bought this book on the recommendation of jancis Robinson (her website, not in person) and I must admit my first impression was that it was some sort of MW mafia (Mwafia?) business, recommending each other's stuff. It seems to me to have a kind of Samizdat feel. There's some careless writing and it needs a firm editors hand. I'll confess I barely read it after the first couple of chapters

Your review is, however, so positive that I will give it another shot. Certainly the theme sounds appealing. I will try again.

Interesting that you mention

Interesting that you mention the first few chapters. I ignored them initially and went for the sections I was most interested in, after that randomly expanding. (The reason I read it that way was that I was travelling an awful lot, and with the book being too heavy to take with me I approached it bit by bit during the short moments when I was at home.) Because of this approach I loved the theme that runs through the book as it allowed me to read it in small bits, to use it almost like a compendium, but still have the feel it comes together. That's something I haven't found often in a wine book of this type, and because of that I wasn't too concerned whether I agree with all the detail or the structure.
Also, I found the scientific approach refreshing (despite it resulting in much detail) considering how often wine is indeed mystified even by those who claim to demystify it. I remember having been told by so many winemakers or authors that you can taste the type of slate or clay in a wine, but who has ever checked what elements the roots of the grapevine actually extracts from the ground and which of those can actually influence the taste of the wine? These are the aspects of the book I'd recommend to you, and maybe you will find something of interest there.

P.S. I was also made aware of the book by Jancis (I think it was a tweet) where she referred to Lewin as a friend, I seem to recall.

I too bought this book on Jancis Robinson's recommendation and I found it a mixed bag. He's very good on how modern industrial wines are made with the additions of colour and treatments to adjust alcohol. I also liked his comments on the more ludicrous pseudo-scientific pronouncements of biodynamic followers. HIs country by country sections are much more patchy. Austrian reds are dismissed in a sentence. This is crazy considering how good some are and how wine writers like Jancis herself and Tim Atkin have been praising them. Similarly the Languedoc is written about in terms of over-production whilst ignoring the fact that some of France's most exciting and best value wines come from here. I think the problem with the book is that the scope is too vast for the author to be authoritative on everything. When he writes about areas he knows about and loves, such as Tuscany, he is very good.

In reply to A mixed bag by Henry Jeffreys

Gosh, you are right about the Austrian reds; I had completely missed that bit. However, there are actually three sentences - in one he acknowledges Austrian Pinot Noir, but then dismisses it as irrelevant because of very low production. Anyway, seeing how good Austrian reds are this is a little strange. I agree on the scientific part being one of the parts where Lewin is strongest.

Silvaner in the Pfalz - a guest ramble by Lukas Krauß
The Riesling Retribution by Ellen Crosby. A cozy wine mystery book review
'You can't make red wine on Long Island' - Shinn Estate Vineyards, making local wine in a global world
Supermarket wine promotions
After the frost - the trials and triumphs of a Württemberg winery