When the topic of really expensive wine comes up, my dad has a story to tell. Years ago, when he was working in a Michelin-decorated restaurant, one of the guests told him that he had made a good deal that day and now wanted to find out. To find out whether the most expensive wine on the menu was really worth it. So he asked my dad to bring that bottle and get his colleagues too so they all could taste the wine. A few minutes later a group of highly trained sommeliers and waiters clustered around the guest and sampled the wine - I think it was a Bordeaux - to conclude: nice, very nice in fact; but not nice enough that any of them would spend even remotely as much money on a bottle. Even so they were all happy, especially the guest as he now had found out what he always had wondered about. 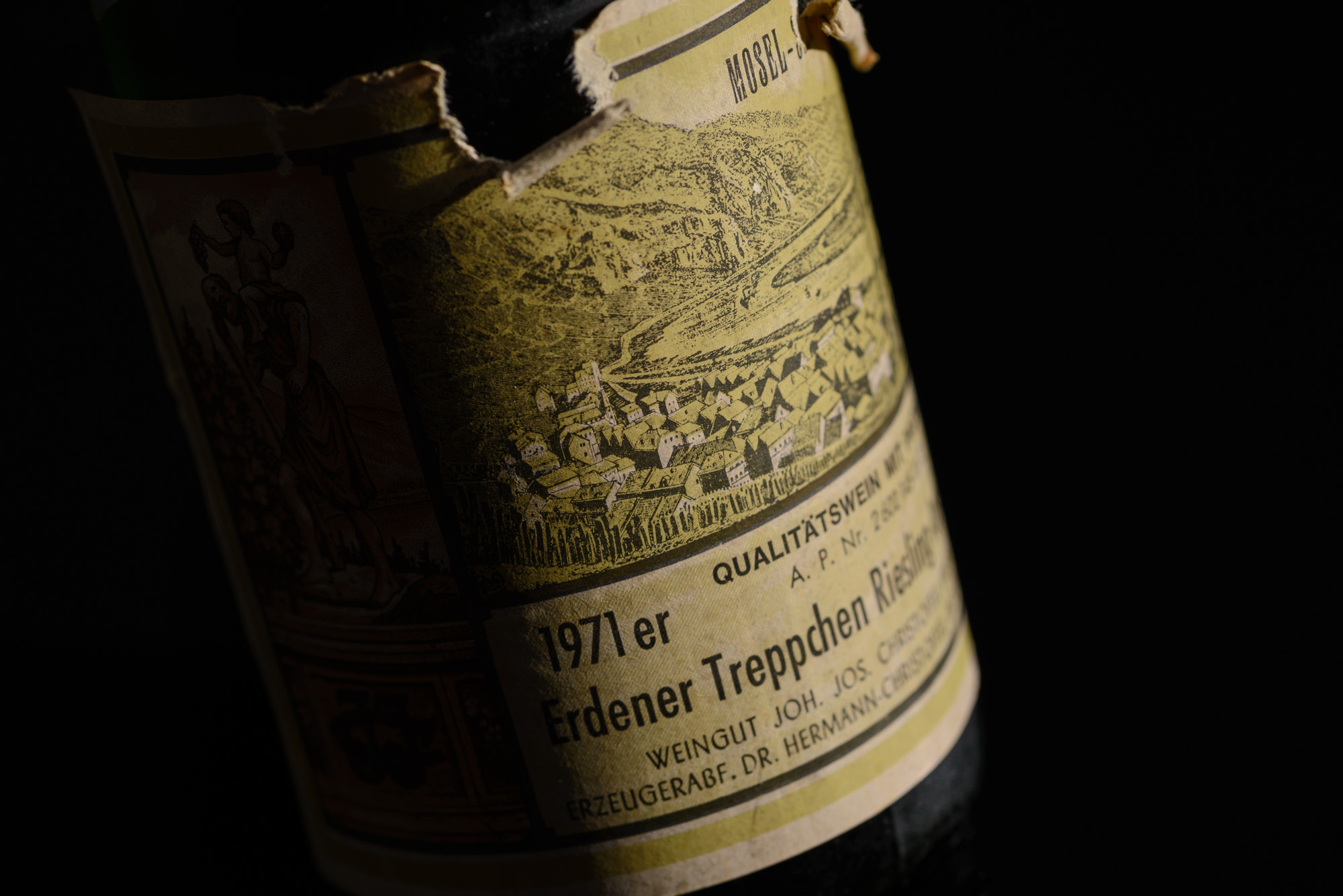 Today I am embarking on a, somewhat, similar mission. Behold, and you will see the most expensive wine I have ever bought, a Riesling older than yours truly. And the question is: was it worth it?

Now, I have tasted wines more expensive than the 1971 Mosel Riesling, and I have sampled older wines too. However, my personal buying - and the Wine Rambler is almost exclusively fuelled by that - is much more modest, with the most expensive wine to be reviewed here previously priced at €62, and that one was already an expensive exception. Why then did I buy a wine that was perhaps twenty times more expensive than the wines I would usually buy? For the same reason that some people spend ridiculous amounts of money to be pushed out of an airplane - for the experience. To find out what spending a three digit figure on a single bottle feels like, to enjoy the pleasure of a natural product still alive after over 40 years, to drink a wine that was already maturing nicely in a cellar before I was even born.
There was also an occasion, well, two in fact. I was looking for a present to myself for changing jobs - at around the same time when the London wine merchant the Sampler announced they had got their hands on a collection of aged Rieslings. Following that announcement I consulted with my co-Rambler Julian and we concluded that I should go for a bottle of 1971 and a good vineyard although perhaps not one of the wines that would command an even more ridiculous price.

Enter Joh. Jos. Christoffel Erben, or the "Successors of Johann Joseph Christoffel", a family-owned estate that has a few hundred years of history in the Mosel village of Ürzig. The Christoffel vineyards are famous for their old vines - some of them are over a hundred years old, so there is a chance that some of the vines that contributed grapes to the 1971 are still alive and kicking today. In 2001, Robert Eymael of the Mönchhof estate took over the vineyards or Christoffel and as far as I am aware he is still exclusively producing Riesling on the famous vineyards.
The other aspect that needs covering is the year 1971 - which is generally seen as one of the great vintages of the century, along with 1911, 1921, 1959, 1976 or 1990. 1971 saw early flowering followed by bad weather, which reduced the yield, and then a great balance between rain and sunshine, with the year ending in near perfect weather. So there we go, a wine from a great year and a fantastic old vineyard - what better to enjoy an aged Riesling? 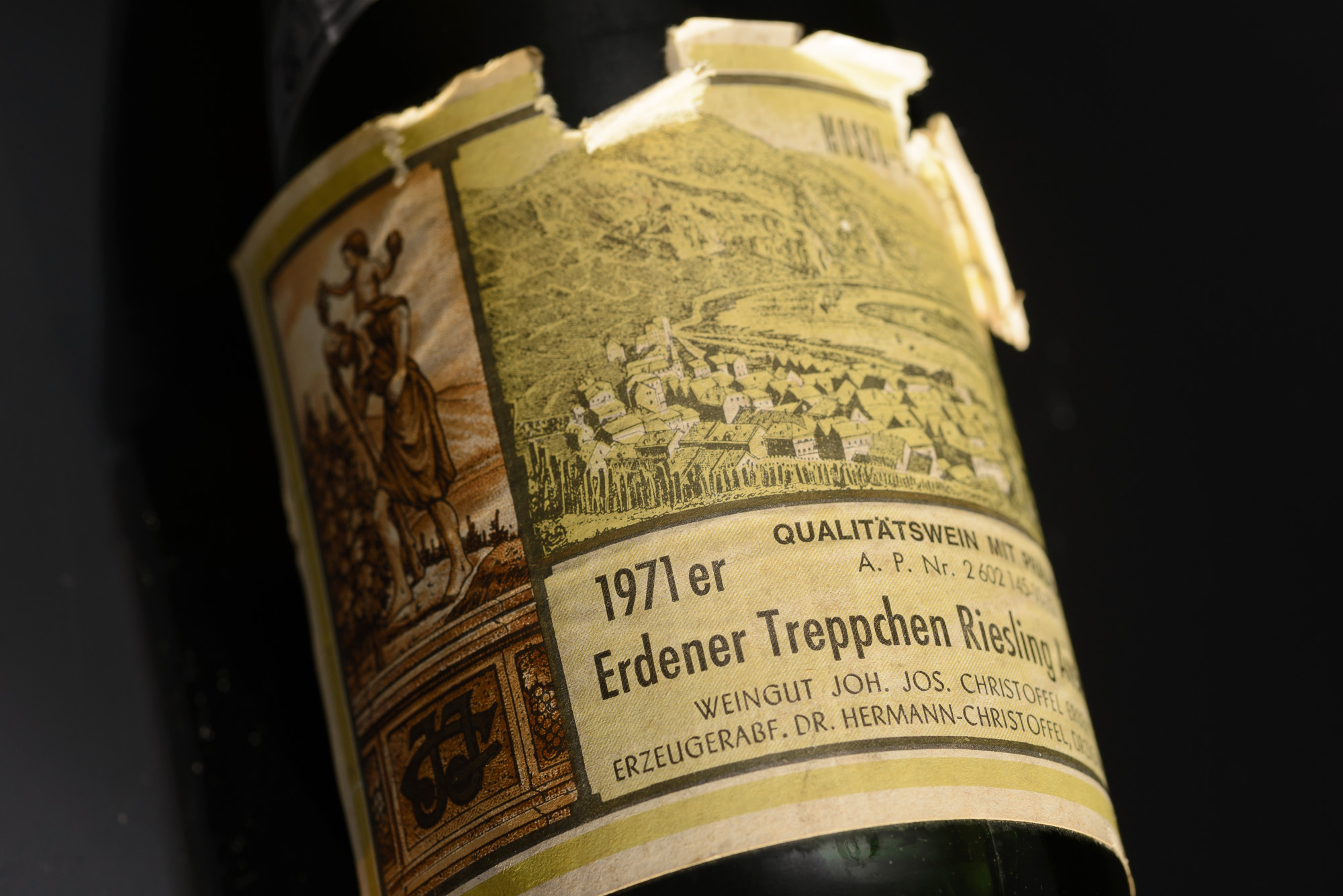 Among the interesting features of aged Riesling is the colour - the Christoffel featured a great amber with a notable red tint. Pretty! Fresh out of the rather dusty bottle it smells a little like musty, albeit not unpleasant cellar. A good swirl in the glass later the light musty smell opens up to what essentially smells like a summer meadow: hints of strawberry; yellow fruit; pear drops; honey; herbs and camomile tea. The mustiness is now nicely embedded in subtle fruit aromas. Interestingly, the wine tastes older than it smells, but on the tongue it has the same dynamic between more bitter and fruitier flavours, between juicy moments and a light, almost tannic texture. Grapefruit, peach, apple juice and glucose feature, especially in the finish that ends on a surprisingly juicy note with a bit of musty spicing. Different flavours, textures and aromas are all very well integrated, and while I think I would have enjoyed it more a few years earlier in its life-cycle the Christoffel definitely has harmony. With the sweetness having gracefully receded over the years it also makes for a good food companion.

So, all in all a highly enjoyable wine - but was it worth it? Yes and no. Objectively speaking, a tenth of the price buys you stunning younger Riesling or a nicely balanced 20 year old specimen from a producer like Martin Müllen. As much as I liked the Christoffel I also think it was probably just past its prime, which is not what you want from the most expensive wine you have ever bought. However, there is something unique about enjoying a natural product that is still alive after all these decades, to think about time and all the developments the Riesling had seen in the world, to marvel about life and death and what an amazing product wine is. In short, for those who enjoy that kind if thing it is a bit like a transcendental experience. And as such it stays with you when all the memories - if there ever were any - of the £5 supermarket bottles have long since died. And for that, I think, it was worth it, probably even more so than for the nameless guest with the Bordeaux.