When you speak about the Mosel valley in a wine context, chances are that Riesling will be the topic. On occasion though I feel the need to raise my hand and confuse both class and teacher by saying: 'and what about Pinot Noir?' Yes, you have heard correctly, for me the Mosel can also be Spätburgunder (the German name of the variety) territory, at least as far as Markus Molitor is concerned. It must have been around early 2007 when I bought my first Spätburgunder from Molitor, and I have been a fan ever since. A few days ago the time had come to open the last of the 2001 and find out how well it had stood the test of time. 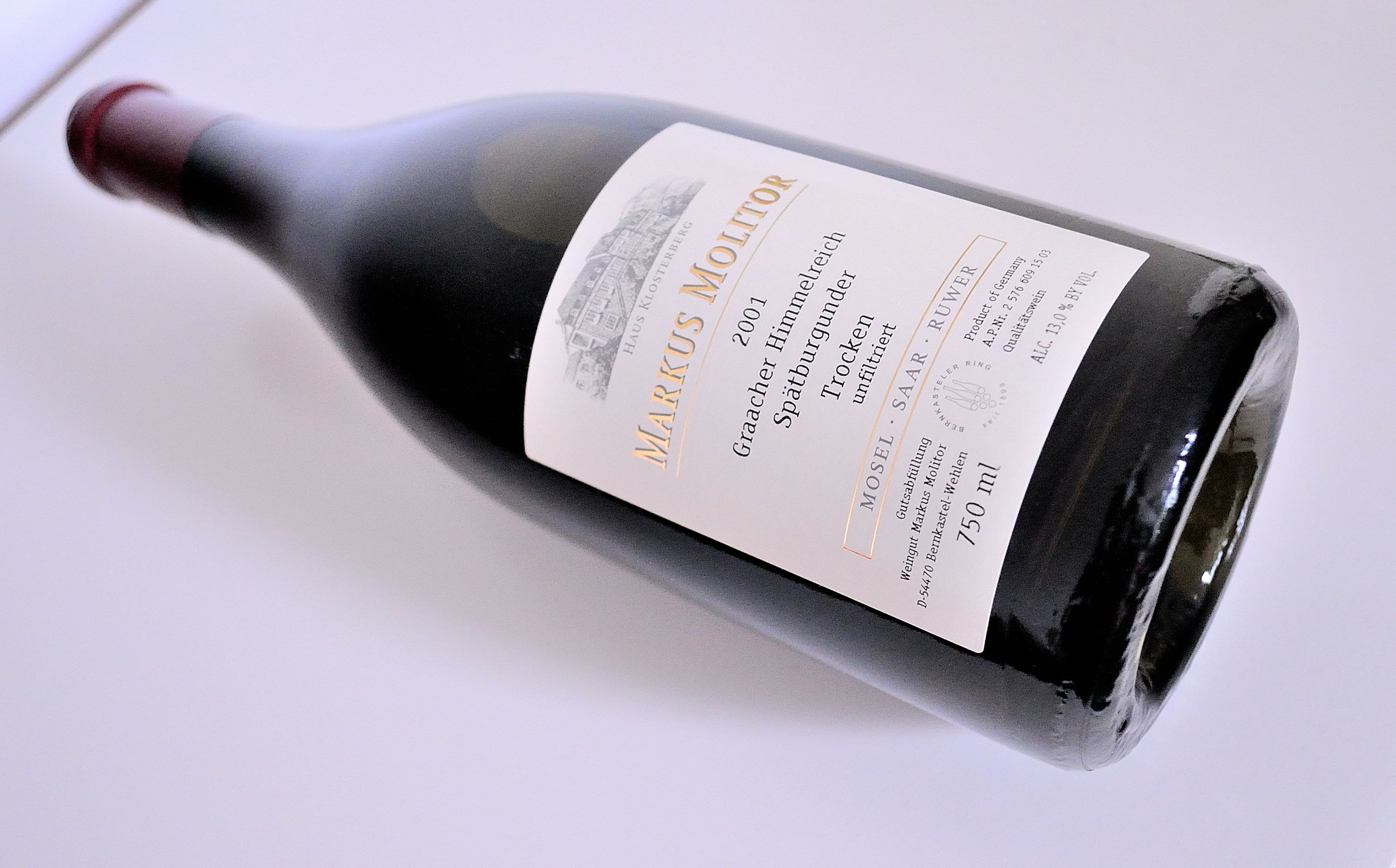 It was in the late eighties that Molitor planted Pinot Noir in some if his vineyards, including the ones near Graach, an area where even today Riesling is grown pretty much exclusively.

The first few vintages were mostly about experimentation for Molitor, but from 1996 onwards he felt the wine was getting where he wanted it. The critics seem to agree: Molitor has since won several awards and regularly receives top scores for his Pinots.

The last time I tasted this particular wine from the 2001 vintage, I was very impressed. My tasting notes from January 2008 read as follows:

The first thing you notice about this wine is the bellied bottle that gives it an air of gravitas. Then comes the colour - I have never seen such a strong and intense red-brown Spätburgunder.

The cork smells of smoke and oak, but in a very sophisticated and incredibly smooth way - and the wine is even more intense, adding black cherries and a hint of mineral. In the mouth lots of fruit, black berries, cherry, all in a very sophisticated way. A little chocolate and coffee mixed with morbid notes of hay and vegetable complement the taste.

Immensely enjoyable. One of the best Pinot Noirs I have tasted.

What has happened since? Well, first of all it is important to state that I have stored the wine in a wardrobe in my London flat since 2007 - not exactly the ideal place to store wine that is already a few years old, so this is not meant to be taken as a comment on how well the wine would have aged under ideal conditions.

The colour seems to have faded a little, a very shiny garnet leaning more towards the brown. The wine feels even more autumnal with aromas of dead leaves and dried cherry fruit; the nose also shows a little more cocoa and less smoke. On the tongue the cherries are still very present (a little more sour perhaps), but again it is the autumn sensation that is so very striking: mulch, dried herbs, mushrooms - all very leafy and musty - make for a pleasantly morbid mix.

The morbidity is balanced nicely by the fruit and really good acidity (with a few other elements such as a faint taste of rose petals) that keep the wine lively and alive. Acidity in red wine is too often underrated, I find. Here it works very well, keeping the morbid wine fresh in what ends on a long, spicy finish.

In 2008 this unfiltered Spätburgunder may have been at its peak, whereas at least this bottle now shows the first signs of slowly falling apart. If you consider how badly the wine has been stored for the last three years of an already reasonably long life though I'd still like to uphold my original rating.

Tried the 07 Hans Wirsching Spatburgunder S recently. Tasted blind with pinots from Switzerland, France and Oregon (USA)
Wirsching was the wine of the night, worth a try if you get the chance.

In reply to German Pinot by Tom Kersten

Thanks for the comment, Tom. We have tried Wirsching before, but only the white wines, especially the Silvaner. If everything goes according to plan I should be able to try his Pinot Noir at a tasting in November though!

I attended a walking dinner at Markus Molitor a couple of weeks ago and really, really enjoyed their wines. The focus was on late harvest Riesling, though, so it's good to know that their Pinot comes recommended as well. I only had a sip of one of the 2009 Spätburgunders, and I think that one needs some more time. Now I'll definitely be on the lookout for an older one. Thanks!

In reply to Makus Molitor by Lesley

Thanks for sharing that, Lesley. From the wines I have tried so far I agree with your assessment of the 2009 Spätburgunder - the more complex ones just need a few years to develop. Molitor has an amazing range of Riesling though, really fantastic stuff, from dry to sweet. So now you have made me almost jealous with your dinner story!