Some wines are waiting for a special occasion. My Pinot Noir "R" from the Molitor winery had been waiting almost ten years for its time to come (although most of it in the cellars of the Molitor estate at the Moselle) - until a friend invited me to Oxfordshire for an autumn Sunday in the countryside, including a braised duck. So off I went, and the Pinot Noir from the Moselle came with me. And boy was it worth the wait (although I am not sure if the wine really cared as much about it as we did).

Traditionally, the Moselle - or Mosel, as the German call it - is known as the home of the German Riesling, especially the lighter, fruitier and sweeter Riesling that regularly wins high ratings in international wine challenges. However, since the 1980s or so, red wine has slowly made its return. Molitor started planting Pinot Noir about 20 years ago and has received a lot of praise for his Spätburgunder, also from the Wine Rambler. This is not only the oldest Molitor wine for us to review so far, but also the oldest Pinot Noir.

I bought the 1999 Spätburgunder "R" last year when we visited the Molitor estate for a tasting. We had no chance to the sample the "R", but I was curious to find out how well the Molitor reds would age, so I bought a bottle. That was a mistake - I should at least have gotten two. Or three.

The colour first: red, of course, but a magnificent light red bordering on brown, almost like a fortified wine. The nose reminds a little of a light sherry too, age and sophistication, and marinated cherries, with a certain earthiness.

The age of the Pinot also shows on the tongue, with all components very well integrated: you can still sense the toasted breadcrust aroma of a Spätburgunder, but it is just one of several background flavours that come together into a very drinkable, smooth and elegant wine that still has a little bit of punch and even a light freshness to it. Add some wet hay and leafs (also present in the nose) and yet again the cherries, with a bit spice, and you are in Pinot heaven.

I would not say this is the best red wine or Pinot I have ever had, but it definitely shows that a) Molitor Spätburgunders can age very well; b) a nicely aged Pinot is just an immense joy and c) that you should drink more German red, specifically Pinot Noir, unless we have already corrupted you to that mission. Also, for about 15 € it is very very good value, especially if you take into consideration that I was charged that price in 2008, not in, let's say, 2002. Since then, sadly, Molitor Spätburgunder has become a rather pricey delight...

Below, by the way, is the nice little bird we had with the wine - a good companion indeed (although a somewhat younger red with a little more toastiness left would also have gone very well with the yummy crust of the duck). 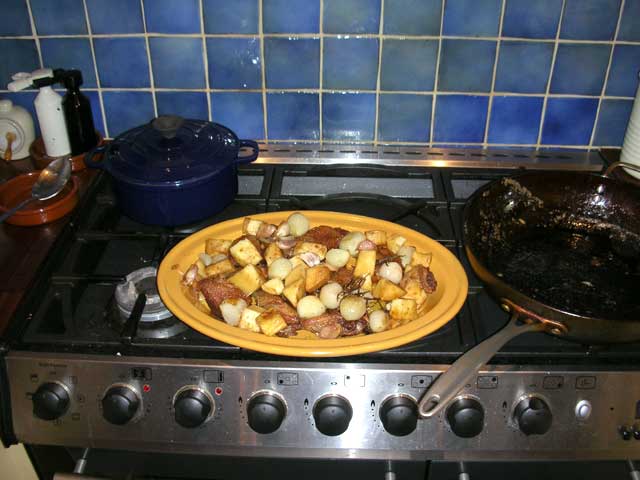