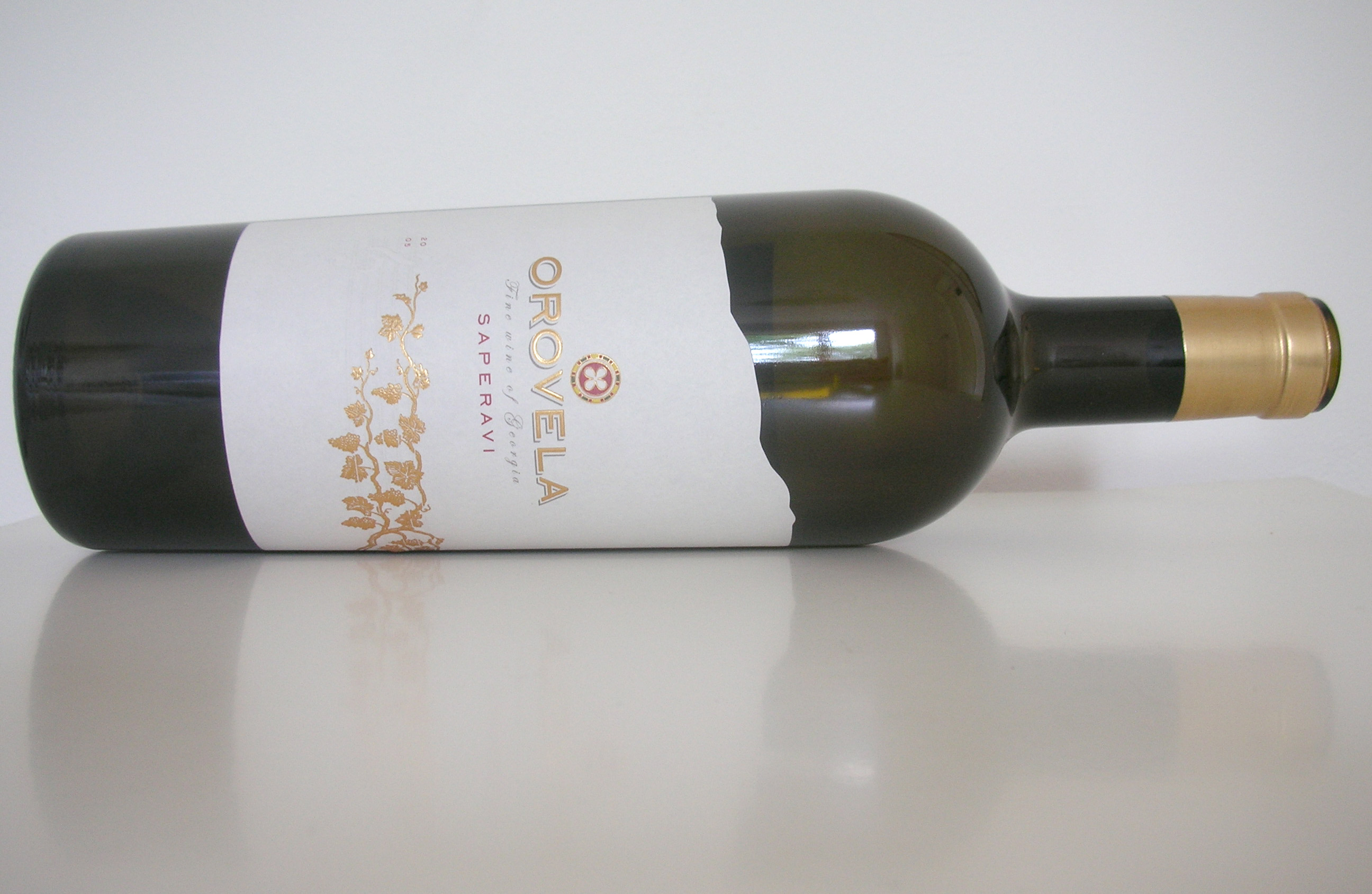 Orovela, the name of the brand, takes inspiration from traditional Georgian ploughing songs. The Chandrebi vineyard is located on the right bank of the Alalzani River, near the village of Ikalto in the wine growing region of Kakheti. It is about 500 meters above sea level in an area that has hot summers and mild winters; the Chandrebi vineyard is somewhat cooler and drier than the rest of Kakheti. The vines were planted in 2001, 35 ha of Saperavi and 5 ha of Mtsvane, a white variety. The Saperavi was matured for a year in French and American oak barrels. And it comes in the most massive and heavy bottle ever.

Even this picture will not quite give you the impression of how heavy the bottle is. I thought that Markus Molitor's Burgundy bottles were bulky, but now I have decided to keep at least one Orovela in my bedroom to chase away burglars instead. The empty bottle weighs over 900g, more than twice the weight of the average Riesling bottle. It still manages to look reasonably good, compared to the ugly Black Tower bottles of similar shape (but a lot less weight though). Bottle stats aside, what's the wine like? 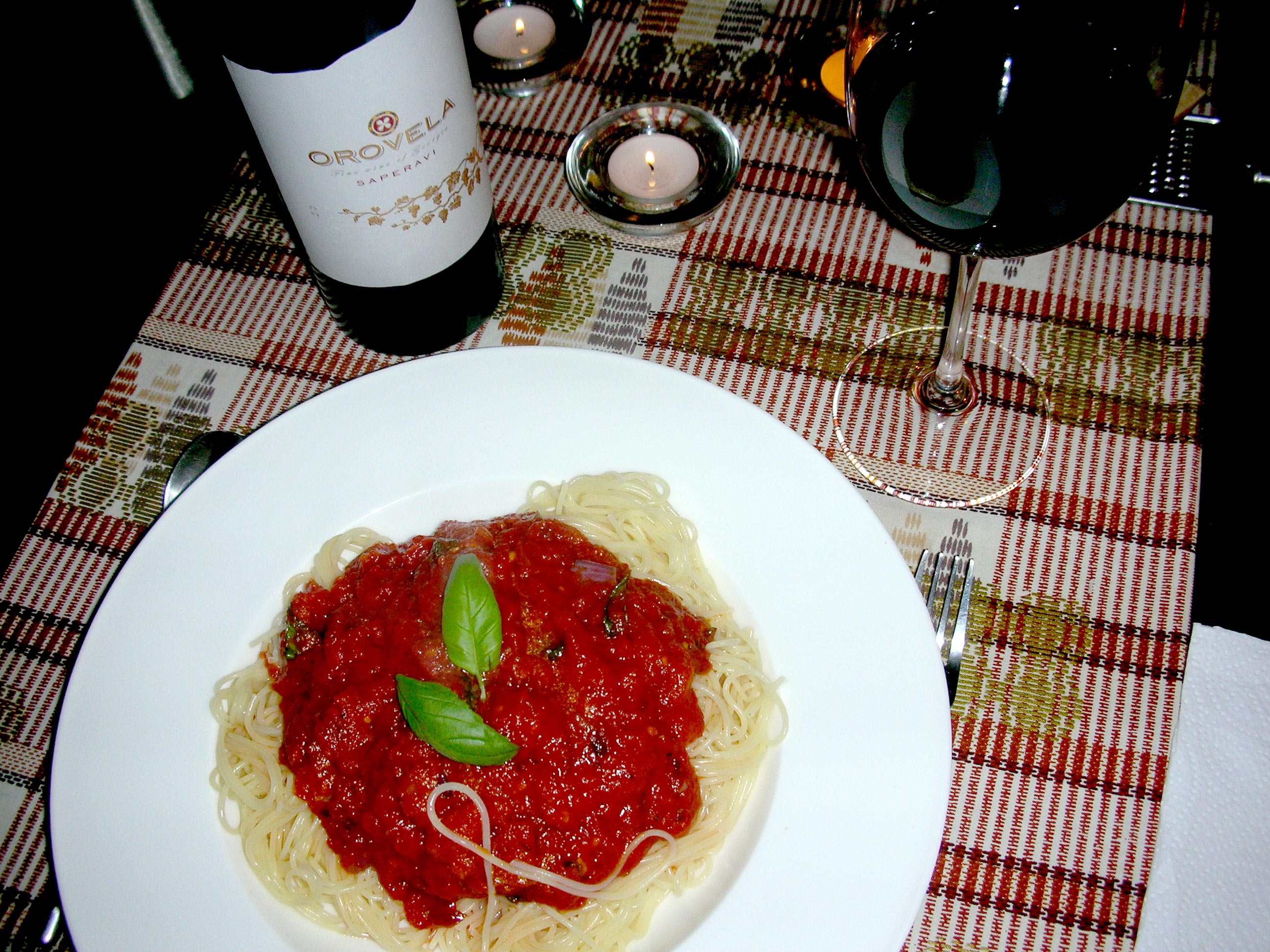 The colour is a marvellous dark ruby red, going purple round the edges. The bouquet was already pleasant immediately after uncorking the bottle, an hour or so later it had developed into an enticing mix of: dark berries; cherries; spice; smoky, mentholy mineral; coffee and a hint of vanilla. On the tongue the lovely berries return (blackberry, cherry and mulberry), as do the vanilla and the spice. Interestingly, if from the colour you'd hope for a very deep, oerly rich, oaky monster you'd be very disappointed. Instead, the wine is very soft and smooth, with well integrated tannins and enough acidity to keep it lively, not overwhelming but just very very drinkable with a pleasant juiciness that gave the good finish a hint of sweetness in-between the spice, vanilla and berries. A very drinkable, unpretentious, really friendly wine that is fruity and juicy without falling into the big-but-boring-flavour trap. With 12.5% alcohol it is very drinkable indeed and I found myself going back again and again to the bottle, even after the tomato pasta (to which the Saperavi made an excellent companion) was gone - until the bottle was empty. If I had one criticism it would be that the price could be a little lower. Even so, one of the most drinkable reds in a long while and more than enough to put both Georgia and Saperavi firmly on the map.

Time to lean back now and listen to Hamlet Gonashvili and the Rustavi choir singing an Orovela:

Thrilled to read about this adventure. After my own very modest forays into wines from east of Germany, I cannot imagine trying one and not having a story worth telling. And this is a good one.

In reply to Eastward Ho! by Julian

It is also a good wine! And great idea with the Dekker/Kingsley reference, old bean.