Sometimes, sometimes I smell the cork of a freshly uncorked bottle of wine and I know great things are ahead. Sometimes, sometimes I do not even have to get my nose close to the wine glass to sing and jubilate. Sometimes, sometimes I set a wine glass down in utter awe, in quiet yet powerful excitement because I have found a wine that is pure awesome. And guess what, I just had one of these moments. Without doubt, this is the best dry white wine I have had in 2010, such a wonderful dream of peach, mineral and elegance that I could still cry tears of joy: the 2008 Goldberg, a Riesling from the Mosel(le) tributary Saar. 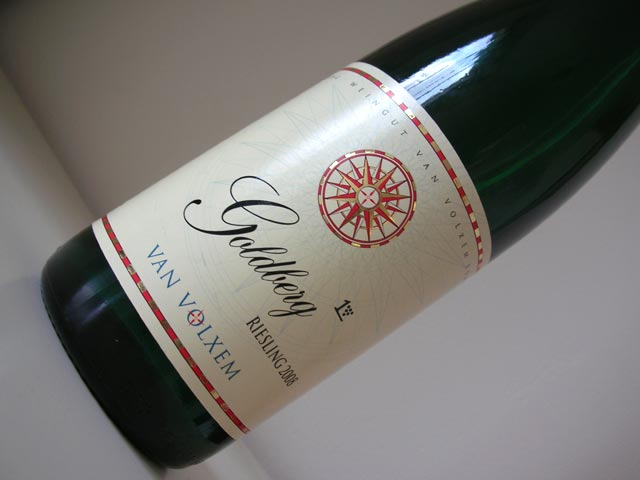 Goldberg ('gold mountain') is the name of a vineyard dominated by steep slopes and slate. One of the most famous vineyards along the Saar in the 19th century, it was slowly forgotten over the course of the 20th century. A few years ago, Roman Niewodniczanski, owner of the Van Volxem winery, bought seven hectare of the Goldberg vineyard and has since worked to restore it to its former glory. And what a success it has been.

The most important thing about Van Volxem's Goldberg 2008 is: give it time. Immediately after opening the bottle the nose was closed - still fascinating, but what a difference from the powerful bouquet that hit me two hours later (a case for our friend Mr Decanter). Like everything about this wine, the nose has power and is almost exuberant, but so focussed, well structured and elegant that it is never overwhelming. The other most important thing about Van Volxem's Goldberg 2008 is: peach, baby, peach. I have had glorious, peachy Riesling before, but should I ever forget what a peach smells or tastes like I would want to have another bottle of this wine. So there is peach, lovely, almost caramelised on the tongue, and a good dosage of mineral, herbs, apple and menthol (paraffin-)wax, all presented in the most well balanced and enticing way, fresh and dynamic, yet with depth and muscle (and all of that at only 12% volume alcohol!).

The other most important thing about Van Volxem's Goldberg 2008 is: finish, baby, finish! So you had your peach and apple, all with lovely, vibrant acidity, lime and lemon, plus some exotic fruit, including papaya, and then you get a really good peach finish. And when it is almost over, the finish hits you yet again, leaving you with memories of peach and limey liquorice. I may overrate the Goldberg, but at the moment of drinking it it just felt perfect. Most likely, I am going a bit too far with this rating, but it was such a pleasant surprise and I enjoyed every single moment of drinking it, that I was almost singing, as a matter of fact actually singing, while I drank this. It is so damn good - and really my style of wine. Goldberg, thy praise I sing.

Or maybe, I let others do that. While I think the wine is better than the song, as far as elegance is concerned, it captures something about the Goldberg very well:

And here is the vineyard http://www.weinlagen-info.de/?lage_id=552