One of the less exciting things about living in London is not having a cellar. I sometimes feel a certain envy towards friends on the continent who 'of course' have a cellar and can put age-worthy wines away for a few years or even decades. So whenever I can get my hands on an aged wine I get pretty excited. Quality Riesling, particularly the sweeter ones, can age very well, but if you buy a twenty year old one it is always a gamble. Luckily, I got this one directly from the winery, so I was fairly certain it had been stored properly. Ladies and gentlemen, I present a good ol' boys Riesling from the Moselle: 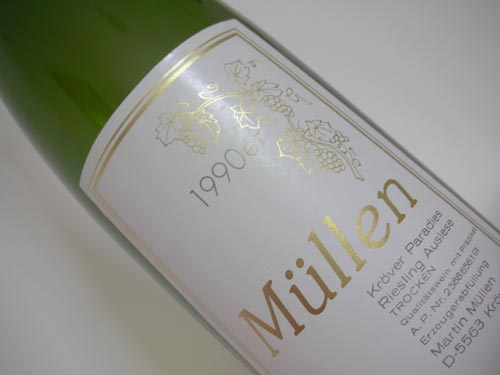 Wine is pleasure, but it can also be about the ritual. Some posh restaurants take this to the extreme with the fuzz they make about the cork (I once had a cork presented to me on a cushion); however, as with many rituals, inspecting the cork is not entirely pointless. Featuring the name of the winery and the vintage, corks can be an additional assurance that the wine you just bought for several hundred quid really is a Mouton-Rothschild. As I got mine directly from the winery (and for considerably less), this was not such an issue, but it was good to see that the cork was still undamaged (it also had an extra wax seal on top) - in an aged wine you really do not want extra air exposure through a damaged cork. So far all was good, although I inevitably managed to crumble some wax into the wine. Once that was taken care of, I asked the maestro to start the drum roll. The experiment was about to begin.

As can be expected from such an old Riesling, the colour was deeper than you usually see in a white wine, a shiny urine gold with some amber around the edges. While red wines lose colour when they age, white wines gain colour in a process that is called maderization and that can make them look almost brown. Through its colour, the Muellen Riesling was signalling that it was of a certain age, but also that it had a few more years to go (in fact, I was expecting a darker colour with much more amber).

The nose had the typical features you would expect from a textbook aged Riesling: beeswax, paraffin and a hint of menthol mouthwash. However, they were not as strong as I expected and were in fact more than balanced by herbs, caramelised sugar, stone fruit and, particularly with some air exposure, faint aromas of lime and exotic fruit, especially pineapple. The whole impression was that of a refined gentleman who had slowed down a little over the years, but still had more than a twinkle in his eye. Again, I had expected more signs of age and in particular more petrol aromas and less fruit.

This trend continued on the tongue. The Müllen made no effort to hide its age, age that had given the wine a very dry appearance, with the fruit fading into the background. However, the Riesling still showed off great minerality, good focus and surprisingly lively acidity. The finish ended in a very long, tingly sensation of minerally lime all over my tongue and gum, adding even some more peach. While there were some paraffin and beeswax mixed into the aroma, it was by no means an old petrol stinker, as Mrs Munich Wine Rambler likes to refer to these wines, just very refined, well rounded with wisdom of age with a lively kick that kept me interested and lifted the wine up after the initially drier mouth feel. Good body, fine structure, very well balanced acidity - clearly a winner.

You would expect an Auslese-level Riesling from a good producer to age well, but I was really surprised how well this one had stood the test of time. It may be too dry and not aromatic enough for some to enjoy without food, especially if you have never tried an old Riesling, but I found it extremely enjoyable and would like to see more old Müllen wines here in the future.

Hi. Boring w/o cellar as a

Hi. Boring w/o cellar as a wine lover... How about a wine cooler somewhere? At least a few bottles could be stored...

In reply to Hi. Boring w/o cellar as a by Heike

Well, I have a large wardrobe in the bedroom, which allows me to store it where it is dark and the temperatures do not fluctuate as much. Sadly though, there is not really enough space to install a proper wine fridge. A cellar will be very high on my list of requirements for the next flat though! Hopefully you are better catered for!